Oh, you guys are going to like this one. My guest today, Jan Fischer-Wade, discusses the allure of the British accent. Sigh.... Her new book is Veiled Virtues, a teen romantic fantasy with some paranormal elements. 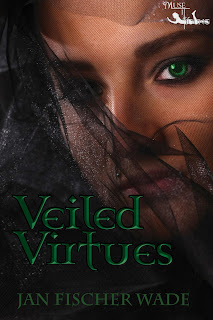 
Why are British Accents so Dang Hot???
Okay, I’ll be the first one to admit it. If I hear a guy with a British accent, something inside me just melts, Ahhhh. This was part of the reason I sent the heroine in my new book, Veiled Virtues, to England. And connecting that accent to a handsome, muscular hero – a modern day knight – well, let’s just say OMG!

Some will point out that there are numerous “British” accents, and that is fine. I love ‘em all – Scottish, Cockney, Welsh, Brummie – whatever! [Side Note: Even the IT guys my company use in Northern Ireland can turn a computer problem into a wonderful afternoon telephone chat.] But, I think what I am probably most referring to is that upper class English accent – think Colin Firth in ‘Pride and Prejudice’. He kept us all swooning, right?
This list of sexy Brits (with their yummy accents) can go on and on - Jude Law, Robert Pattinson, Daniel Radcliffe (its okay people, he’s of-age now), Orlando Bloom, Hugh Grant, Ewan McGregor, Paul Bettany…  Oh, and of course DAVID BECKHAM!! Have you seen that new McDonald’s ad??? Even the middle-age male manager swoons!

Even the movies have caught on to this phenomenon.  In “Love Actually” the slightly bug-eyed and awkward young Englishman Colin Frizzle strikes out with girls left and right on his home turf of London. Determined that he is a Love God simply “on the wrong continent,” he takes his self-admitted “cute English accent” and travels to the United States to find a girlfriend with the realization that “Stateside I am Prince William without the weird family.”  Next, he’s “on shag highway heading west.”  Colin lands in Wisconsin, has a taxi take him to the nearest bar, orders a Budweiser, and finds not one, but three girls who fawn over him and his accent.  Needless to say, he returns to London, with an American girlfriend in tow. If you haven’t seen “Love Actually” – do it now! I love, love, love this movie!  Hugh Grant, Colin Firth, Alan Rickman, and a whole host of others star in this movie. Rowan Atkinson’s bit is particularly funny!

So, what is it about the accent?  Does it indicate chivalry? Money? Manners? Alluring stranger from another country – a bit exotic yet safe?

Or, like so many things, did it all start with the Beatles?

We may never be able to pinpoint the ‘why’ but regardless, if you swoon at an English accent, are lured to English men for any other reason, or the thought of a strong, hot, modern day knight sets your insides aglow, check out my book, Veiled Virtues!

Well, I'm sold! You can purchase Veiled Virtues (for the special price of $1.99!) at Amazon, at MuseItUp, and many other venues.