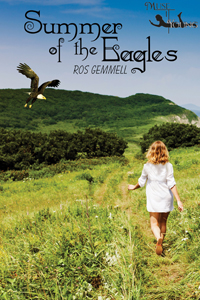 Today's special guest, Ros Gemmell, writes to us from Scotland. And about Scotland. Her new tween fantasy novel is called Summer of the Eagles, and she shares some thoughts about the themes in her work.

Themes in Summer of the Eagles
Many thanks, Anne, for hosting me on your lovely blog today.
Although I wrote Summer of the Eagles as an adventure and slight fantasy novel for the 10 to 14 age group, the story does contain a few themes that might resonate with young teens. I’m a great fan of some escapism in all fiction, for whatever age, but it’s good age at which to explore the wider issues that might affect some young people.
Bereavement and Thoughts about Death and Afterlife
13 year old Stephanie (Stevie) is suddenly orphaned, with no one to care for her apart from an aging Gran. Although feeling bewilderment, grief, fear, and even anger, she is unable to cry for her loss at first. She retreats into herself, refusing contact with her friends. She becomes moody and stroppy, and difficult for Gran to deal with.
Before Stevie woke up in hospital, she was in a beautiful dream-type garden with her parents. The image of their coffins at the funeral sometimes haunts her and she prefers to think of them in that happy garden together - or in heaven if it exists. She hopes they might all eventually be together again one day. By not telling to anyone about her feelings, Stevie is keeping everything inside her and cannot deal with her fears.
Body Image and Sporting Dreams
The accident that killed her parents leaves Stevie lame and unable to continue with her hopes and dreams about running for Scotland one day. Although hardly scarred outwardly, her long hair has been cut short and she begins to put on weight from the sudden lack of exercise and eating too many biscuits and so on. Stevie loses the motivation to do anything to help herself and is deeply sad and depressed. The doctor told her to exercise her leg, but she doesn’t believe she can. When she eventually begins to walk more and even cycle on the island, it helps in every way.
Using a Fantasy Element and Imagination
When Stevie eventually begins strengthening her leg by walking into the hills, she meets Karig, a strange boy with unusually piercing amber eyes. He seems to have some connection with the eagles and Stevie begins to trust him as someone in whom she can confide. This character was inspired by all the references to eagles in the Bible, myth and legend. Stevie feels a connection with Karig that makes her feel protected and understood. He is the only person she can talk to about her feelings and pain.
Bird Protection
One of the themes in Summer of the Eagles is the problem of bird and egg poachers. Two men are on the island to harm the birds/eagles and Stevie finds herself in danger from them. She also gets involved in the bird sanctuary where her aunt helps out. There she learns about how they protect and look after injured birds around the island. This is also an allegory for how Stevie begins to heal. Stevie begins to care about the orphaned birds she meets and eventually accepts some of the other people who care for all the birds.
These are a few of the general themes affecting Stevie in her new life of the Scottish island, but at the same time the story’s setting gives it an almost other-worldly feel as Stevie begins to heal and make new friends.

That's an impressive number of themes woven into one tween novel! And the Scottish fantasy context makes it all especially appealing.
You can purchase Summer of the Eagles at MuseItUp, Amazon, and AmazonUK.
You can visit Ros Gemmell on her blog.
Posted by Anne E. Johnson at 9:10 AM