Today's guest, Tom Williams, tells us about the research and inspiration for his historical adventure, Burke in the Land of Silver. Ladies and gents, meet James Burke.... 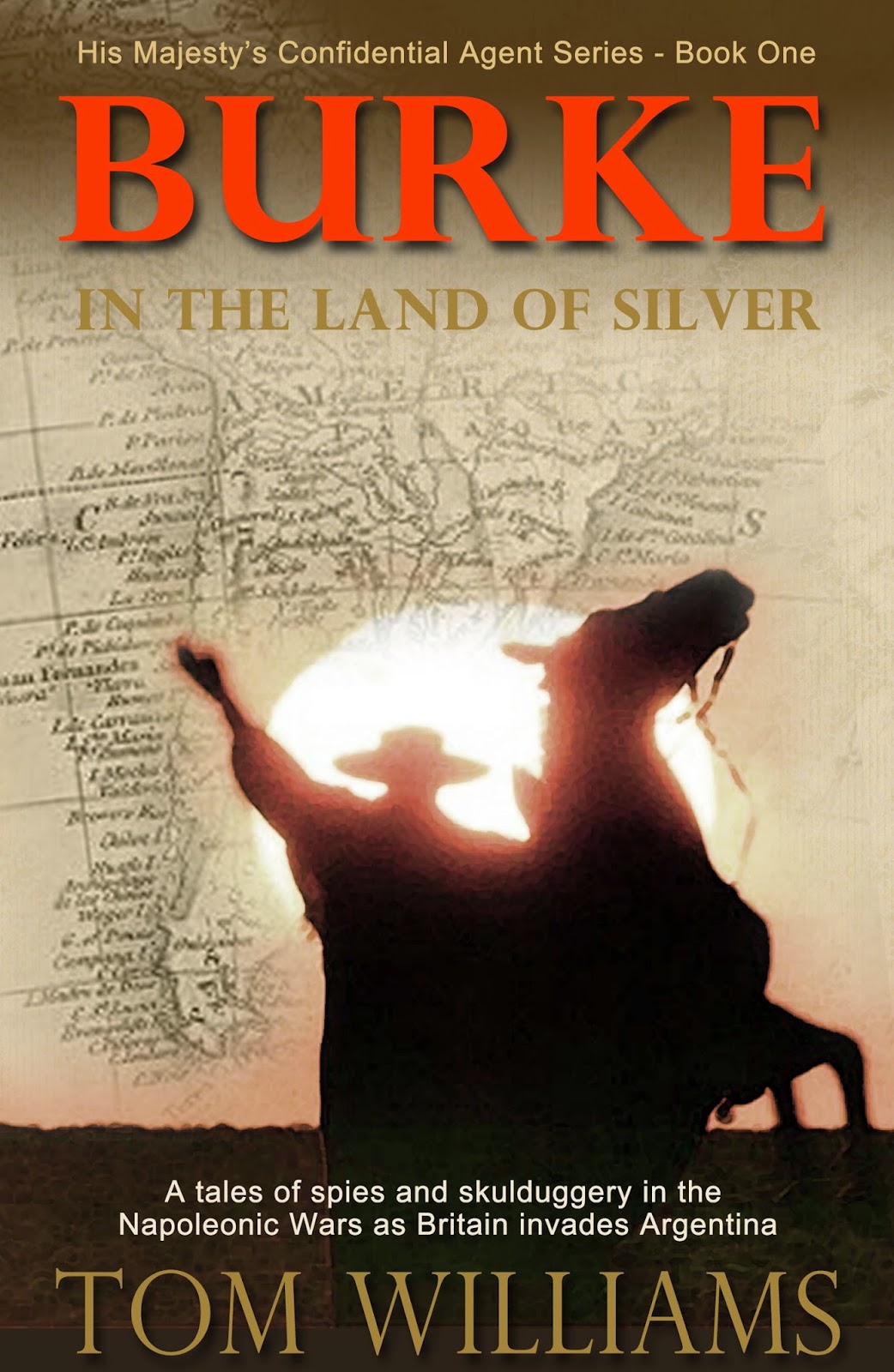 Years ago, I wrote a 19th century historical novel that attracted interest from publishers but was generally regarded as too "difficult" for a first novel. My agent (yes, I had an agent then) said that I should write a more straightforward historical adventure in the same period. It made sense, but I like writing stories that are strongly based in historical reality, so I had to find a real life figure I could base an exciting story on. A friend who knows how much I love Argentina suggested that I look at Europeans who were in South America in the early days of that country. Thanks to her, I discovered James Burke, a little known spy for the British around the time of the Napoleonic wars. Burke’s story had everything: war, espionage, beautiful women and an evil villain.

I've taken a few liberties in the telling of the tale but the plot of what became Burke in the Land of Silver is mostly either definitely true or very well could be. As I had already visited Argentina several times, I was writing about a place that I knew and I made a couple of extra trips to research places that were particularly connected with James Burke. That meant the opportunity to ride out with the gauchos on a cattle ranch and a trip on horseback up the Andes, besides the usual visits to museums and historical sites in Buenos Aires.

The story is set around the British invasion of Buenos Aires in 1806. It’s a little known – and not particularly impressive -- part of Britain's colonial history. The book gave me the chance to tell the story of a military adventure that few people will have heard of.

What I tried to do, having got this historical background accurate, was to write a modern spy story but set two hundred years ago. James Burke was to be my James Bond. I have always thought that Ian Fleming was a great writer and that his books are a model of how to write a thriller. Like Bond, Burke is nominally in the armed forces. Bond is a naval officer, Burke is in the infantry. Like Bond, he is a flawed hero: a snobbish womaniser, always with an eye to the main chance. (I’m not saying he has exactly the same flaws as Bond, but there's certainly an overlap.) In the end, though, we admire him because he is brave, loyal, and, when forced to choose, will ultimately do the right thing. It helps that he’s good looking, an excellent rider, multi-lingual and a crack shot.

Does it work? Well, I enjoyed writing it and, more importantly, I enjoyed reading it when I had to check the finished product before publication. I wouldn't claim that it's up to Fleming's standard, but I think it compares well with some of the stuff that’s been passed off as James Bond since Fleming died. I’m not really the person to say, though. Why not read it and decide for yourself?

*   *   *Learn more about Tom Williams on his blog. Burke in the Land of Silver is available on Amazon as a paperback or on Kindle.
Posted by Anne E. Johnson at 8:00 AM 1 comment:

Michelle Murrain dances with dystopia in FRIENDS WITH WINGS

One of the beautiful things about genre fiction is its malleable borders. A particular genre or trope can swirl into another, allowing the author to create a completely original blend that suits her world and characters. That's what today's guest, Michelle Murrain, has done with Friends with Wings. She explains:

Looking at the Future
by Michelle Murrain 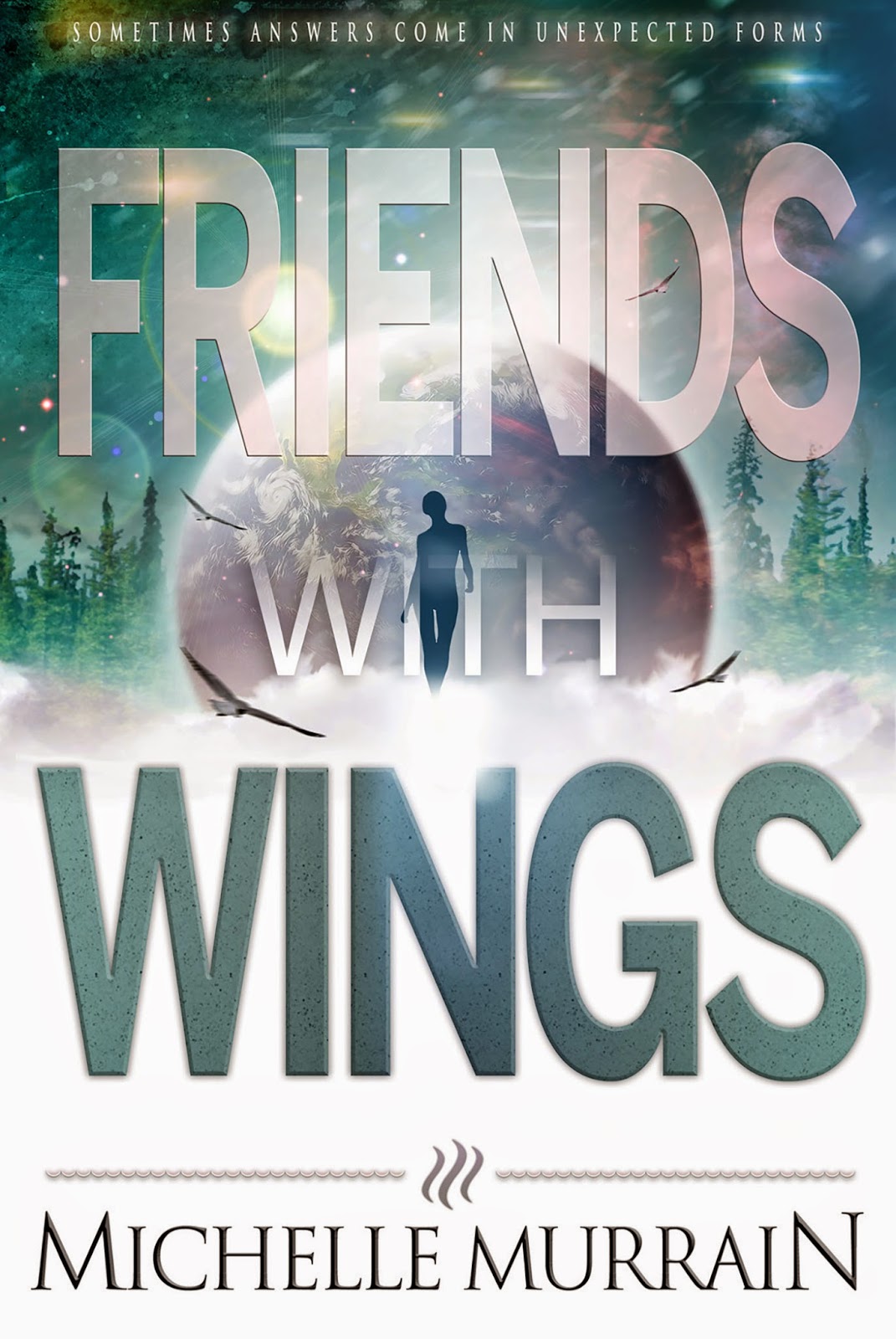 I've read my share of dystopias. Some, such as Octavia Butler's "Parable of the Sower," are powerful reminders of how far we may well fall. Some aren't realistic enough (cue: zombie apocalypse) to make much sense to me. I have yet to write a dystopic novel, and I don't even know if there is one in me. The grim reality of the trajectory of the human species is enough, for now, to keep me from it. Friends with Wings, my newest novel, however, does have some dystopia in it, and a bit of a view through the lookinglass to the future.

Trina, the main character, and only point of view character, lives in the Bronx a little less than 90 years from now, in 2102. Her family was forced to move to the Bronx because her neighborhood in Queens flooded from the encroaching sea. Debt has become inheritable, so she works outside of school to help support her parents, who are trying to pay off debts of their grandparents. She won the lottery to go to school, her sister didn't, so she works full time. When her parents die in an accident, in order to repay the debt, she has to "sell her labor contract," which is early 22nd century speak for being sold into slavery.  She's very lucky to catch a berth on a ship leaving Earth. Otherwise, she'd be stuck in a factory somewhere for the rest of her life.

The looks at the future come later, when she's listening to old, delayed, broadcasts from an increasingly distressed Earth, as she is settling in, and learning about the planet Johannes, where she finds herself. But her life, and the bulk of the book, are about survival on a different planet, and her companions, the Eeriv, an intelligent winged species that populate the planet she's on. Earth's travails are a backdrop she lives with, but isn't really in touch with.

Although the dystopic future is not center stage, Trina's direct experience of that world determines her perspective and approach to things. She's practical, strong, persistent, and doesn't take much for granted. She's resilient, determined to survive, and determined to do good for her family. Relatively early in the book, Earth is the past, and can never be revisited. It is, in its way, irrelevant. I think that is as close to delving into dystopia as is possible for me, at least now.

Alma Alexander on RANDOM and what it means to be human

Today's guest, Alma Alexander, writes fantasy. She explains how she sees the imaginative world of her fiction as standing for the complexities of everyday life. 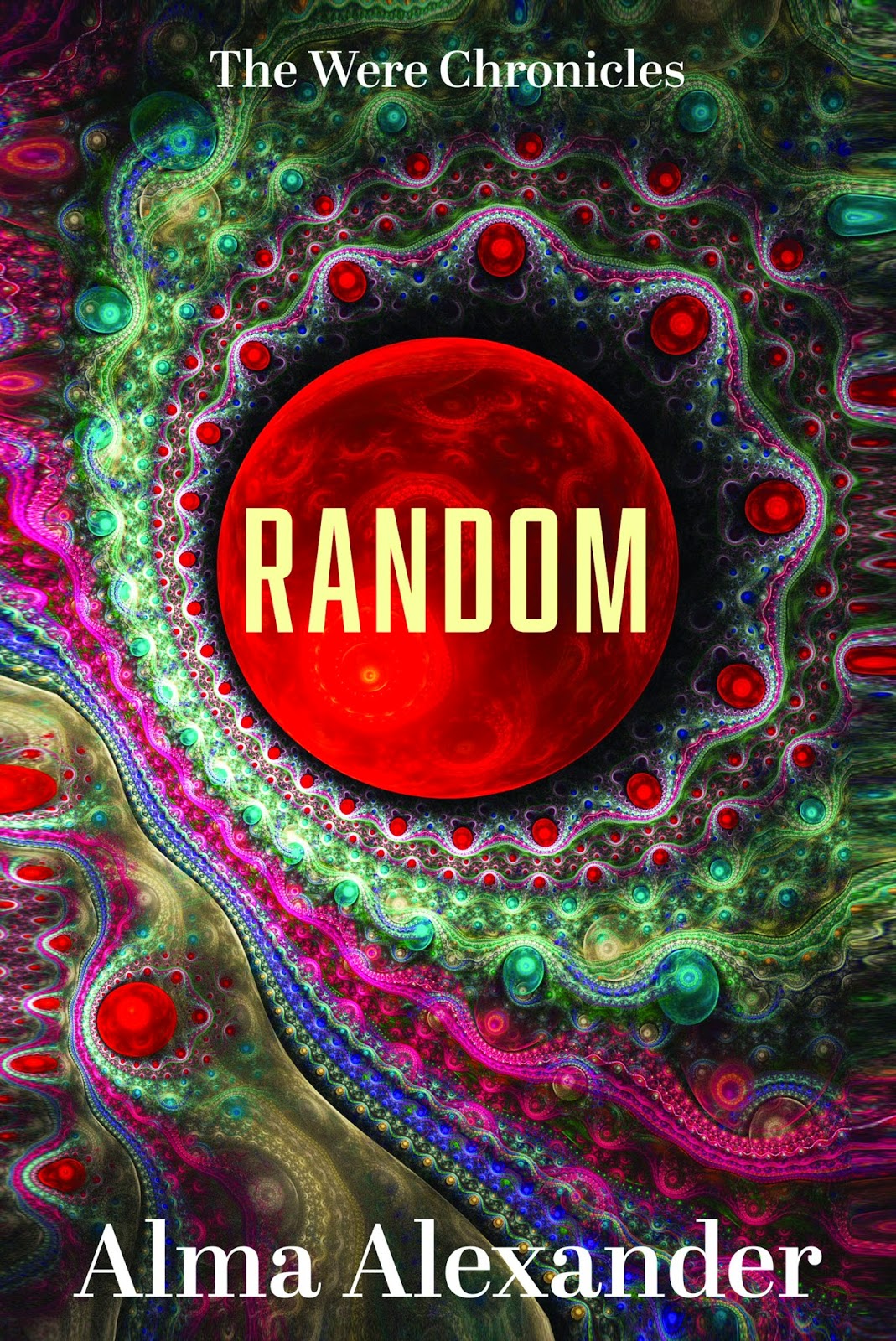 When a new book comes out, it's  always fascinating to see just whatit is that jumps out at people, what readers take away from it, howthey respond to the things the writer believed important enough tobuild into the story.In reviews of my latest book, "Random",  I was very happy to seereaders and reviewers pick up on the things which had mattered to me,which I had put in there for a reason and a purpose, and which werefinding their mark - things like how I had portrayed issues likebullying and discrimination, what it felt like to be an immigrant in astrange new place, what it felt like to live "different" and how itaffected the minutiae of one's life.I was very happy to see comments like "this is a book on what it meansto be HUMAN" - because that, wrapped in the fantasy world inhabited bythe Were-creatures I had created to live there, was exactly what I hadbeen aiming for.Being human is such a complicated thing, almost impossible tocommunicate precisely from one human mind to another; we may share thecommonality of form and function, but our inner lives are all verydifferent. We look at the world as filtered by those differentexperiences and expectations and often find it disconcerting to havethat worldview challenged by somebody else who might look at anidentical thing but perceive it very differently because of their ownset of filters.But here's where fiction - fantasy, in particular - is such amagnificent and unifying lens through which it is possible to look atsomething we would find it tough to focus on in its raw reality and tosuddenly perceive the object we are observing and judging in a verynew light.In fiction, you are offered a set of filters which are almostinevitably very different from your own - and through those filters,with a helping of empathy and insight, you are permitted to seesomething with a whole new set of eyes.What I wanted to put out there is that very question - thatdeceptively simple question - what DOES it mean to be human, what doesit mean when I consider myself human, and how can I possibly take itupon myself to judge another human by standards that apply only to me(because they can't help but fail that test; nobody else can BE me, bydefinition).If readers close this book with that in their minds - if they steal aglance across the aisle and see someone who is not quite like them (adifferent race, a different creed, a different sexuality) and see aconnection which had not been there before - even if only a barehandful of readers do this - we have a beginning of somethingpotentially wonderful. We have the potential to talk to one another,to bridge the chasms between us, to communicate, to understand.And my Were-kind will have left a solid and valuable legacy.

*   *   *
Learn more about Alma Alexander on her website and on Facebook.Purchase Random on Amazon. Read some reviews on Goodreads.