The learning curve never levels out in this business. Here I am, facing yet another new situation, the juggling of books.

For the first time, I have three long works at different stages. Ebenezer's Locker was delayed in finding a publisher because of my time-wasting agent search. It now has a contract with MuseItUp, but no release date. My adult sci fi is finished and ready to go, and in December I regain rights to my other middle-grade novel, which was never published despite its contract.

My concern is that the novels will bump into each other and make marketing very confusing. But everyone should have such a problem, right? I need to get the sci fi out the door, so it has a chance to cause me a marketing headache!

Pain as a Style

Yesterday I was reading Leslie Connor's remarkable, award-winning middle-grade novel, Waiting for Normal, and I was astonished by its emotional richness and by the author's courage.

Connor's impossible feat is to couch her story in a contemporary world of realistic pain, yet make it readable. Waiting for Normal is a wonder to read. That's practically a magic trick, given that the main character is dealing with a neglectful, manic-depressive mom, poverty, her parents' divorce, and the terminal cancer of a friend. That should make you want to slit your wrists, but the writing has such delicacy and such a strong heart that the every triumph over pain fills the reader with joy.


Writing intense pain believably, but in a way that a reader can withstand, is an art that few have mastered. The skill is not only appropriate to realistic contemporary settings, but can inform any genre. One could think of it as a compositional style. Lois Lowry's celebrated middle-grade novel, The Giver, is a good example of science fiction inlaid with real heartache.


It is much trickier to write about pain for a middle-grade than a YA audience because of the need to protect the younger, less-worldly reader. I'd love to hear about other MG novels that you think succeed as being very painful but very hopeful.


[Please note: If you are having trouble posting with Google ID, you can choose the Name/URL option even if you don't have a website. Copy and paste in any URL from another site, and it should work.]
Posted by Anne E. Johnson at 7:37 AM 4 comments:

As much as one wishes for imagination to rule the writing of fiction, reality must at times take over. I've had a good run in the weekly Write 1 Sub 1 experiment (see post below), but now it's over for the year. With the new teaching semester imminent, it's time to switch to the more humble goal of one short story submission per month. And so, my new badge:

Curious to report: Sending out at least a story per week has significantly decreased my rate of acceptances. On the other hand, I've been much more courageous in the kinds of things I'll try to write, so that's very positive, and would explain a lot of the rejections.


I'll have to mull over exactly what I've learned over the past few months as I decide whether to increase my sub pace again next summer. Until then, we re-balance, as all healthy creatures must.


[Please note: If you are having trouble posting with Google ID, you can choose the Name/URL option even if you don't have a website. Copy and paste in any URL from another site, and it should work.]
Posted by Anne E. Johnson at 9:25 AM 6 comments: 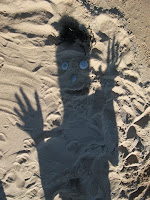 I always enjoy the funny, imaginative, and unabashedly weird stories of Rhys Hughes, and I'm thrilled to have him as a guest today. As you can tell from his photo, he's a shadowy character, so who better to discuss the term "magic realism"?

The term 'Magic Realism' is a mysterious one and I am frequently asked to explain what it means. The truth is that it's a vague term and has many precise definitions, which perhaps is the same as saying it has no precise definition at all. My response is to shrug and simply say, "It's fantasy that isn't fantasy." But that's really quite unhelpful, especially as 'fantasy' itself is a vague term that encompasses an enormous range of styles and subject matter. 'Magic realism' isn't a genre, but it is possible to talk about it as a type of fiction with a distinctive flavour.


There are certain basic qualities that can be called 'magic realist' that one doesn't usually find in conventional fantasy. A writer of fantasy will often try to create a place or a time that may or may not have parallels with the place and time we currently live in, but generally that invented world isn't supposed to be our world. Even if the fantasy story is set in what seems to be everyday life, sooner or later some incident will occur, an intrusion of the supernatural, that ultimately demonstrates that the fantasy world isn't reality as we truly know it. In such stories, all the magic might be said to be external. It comes from outside.
In magic realism, on the other hand, the magic is mostly internal. A writer who is a magic realist rarely invents new worlds but uses this world as a stage, and yet he or she doesn't write about how life actually is but how it sometimes feels. So magic realism tends to be an emotionally based style of writing, rather than intellectually, politically or philosophically based. The prose tends to be 'hot', 'sultry' and 'tropical'. It uses exaggeration and overstatement to present the subjective worldviews of the characters and these subjective worldviews will often interact and influence each other. It is safe to say that understatement has little place in magic realism.
The most famous magic realist novel is undoubtedly still Gabriel Garcia Marquez's One Hundred Years of Solitude. There is a character in that book who is fatally shot. In a realistic story the wound might be described accurately; in magic realism it is described symbolically. We are told that the character’s blood “came out under the door, crossed the living room, went out into the street, continued on in a straight line across the uneven terraces, went down steps and climbed over curbs, passed along the Street of the Turks, turned a corner to the right and another to the left, made a right angle at the Buendía house, went in under the closed door, crossed through the parlour, hugging the walls so as not to stain the rugs, went on to the other living room, made a wide curve to avoid the dining-room table, went along the porch with the begonias, and passed without being seen under Amaranta's chair as she gave an arithmetic lesson to Aureliano José, and went through the pantry and came out in the kitchen, where Úrsula was getting ready to crack thirty-six eggs to make bread.”
This doesn’t mean that the blood really travelled so far, but that the emotional shock of the character’s death was so great that it felt as if his blood was seeking out witnesses to the deed. Magic realism makes very heavy use of symbolism. Every significant event is a symbol or extended metaphor, but even though those events are determined by a literal application of feeling, they are also presented in a deadpan style. So if someone is deliriously happy they might start flying, but nobody around them will comment on this miracle, even if they notice it, because the flying takes place on the inside.
To redefine your own life in magic realist terms you merely have to turn every emotion you experience into a concrete symbol or action. Jumping for joy can now result in leaping over the moon or stars, but don't forget the cosmic ramifications that will follow; being sad might result in floods of tears powerful enough to destroy cities; anger may topple mountains and cause earthquakes. None of this is objectively real but subjectively it is exactly what happens to all of us during the process of living.
I now expect to be told that my understanding of magic realism is wrong, for it is a style of fiction that has many advocates with opposing views as to its real meaning and significance. The best magical realists were either unaware they were writing magic realism, or else they disowned the label when it was applied to their own work, yet it's generally accepted that the original magic realist was Alejo Carpentier. Other Latin American writers evolved the form. Frustrated with the cool rationality and understatement of most Western fiction, they injected colour, vibrancy, mythology and a passion for coincidence, implausibility and hyperbole into their prose.
The heyday of Latin American magic realism was in the 1960s and 1970s. With a few exceptions the style didn’t really catch on in the English-speaking world until the 1980s, and then, for some reason, magic realist novels suddenly flooded the bookstores of Britain and the USA. Back then it was possible for the most difficult magic realists to be translated into English and published by major houses. I remember working my bemused but enthralled way through Mario Satz’s Sol, a book that probably wouldn’t be published now except by a small independent publisher. But an enthusiasm for this kind of literature soon spread to other continents and some of the most accomplished magic realism now comes from Africa, the Middle East, India, and even further afield. Here is a short list of my own personal favourite books in this genre that isn't a genre…
Alvaro Mutis, The Adventures and Misadventures of Maqroll
Mia Couto, Under the Frangipani
Isabel Allende, Eva Luna
Githa Hariharan, When Dreams Travel
Mario Vargas Llosa, The War of the End of the World
Felipe Alfau, Chromos
Amin Maalouf, Leo the African
Cabrera Infante, Three Trapped Tigers
Jorge Amado, Dona Flor and Her Two Husbands
Gina B. Nahai, Moonlight on the Avenue of Faith
Fazil Iskander, Sandro of Chegem
Manuel Mujica Lainez, The Wandering Unicorn
Witold Gombrowicz, Ferdydurke
Juan Rulfo, Pedro Páramo
Gabriel Garcia Marquez, The General in his Labyrinth
*   *   *
Rhys Hughes' new novel, Link Arms With Toads! is available here, and you can also visit his blog.

[Please note: If you are having trouble posting with Google ID, you can choose the Name/URL option even if you don't have a website. Copy and paste in any URL from another site, and it should work.]
Posted by Anne E. Johnson at 8:36 AM 10 comments:

I'm proud to announce that I have a book contract with MuseItUp Publishing for my middle-grade paranormal mystery novel, Ebenezer's Locker. It will be released as an e-book. I look forward to reporting here on the process of publication and marketing.

And in other good news, my adult spec-fic story "The Orpheus Factor" is now released in the newest edition of Shelter of Daylight, a Sam's Dot publication that you can order here. It's got a beautiful cover, don't you think?

[Please note: If you are having trouble posting with Google ID, you can choose the Name/URL option even if you don't have a website. Copy and paste in any URL from another site, and it should work.]
Posted by Anne E. Johnson at 8:16 AM 8 comments: