Some thoughts about a great novel's opening 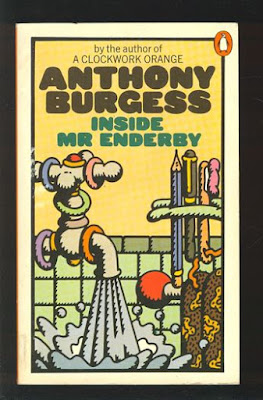 So runs the first line of Anthony Burgess’ 1963 novel, Inside Mr Enderby. The onomatopoeic coinage
represents flatulence, of course. It becomes even funnier when one reads the second line: “And a very happy New Year to you too, Mr Enderby!” That’s the narrator, out of sleeping Enderby’s earshot, inviting the reader to observe the novel’s subject.

Mr. Enderby (or Mr without the period, since he’s British) is a poet. He’s also middle-aged, slovenly, and constipated of bowel and pen. His tale, the first in a series of four novels about him, begins in the second section of Chapter 1. The opening section ─ the one starting with the airish effluvia ─ is an introduction to the character in second person, as if the reader were being guided through a writers’ zoo, gawping at a curious creature labeled Poet:

Yes, remark again the scant hair, the toothless jaw, the ample folds of flesh rising and falling. But what has prettiness to do with greatness, eh?

Although Enderby does not consciously hear the commentary we read, he is at one point described as giving a “posterior riposte.”

In fact, Burgess draws a constant connect between Enderby’s intestinal plumbing and his verse output. His work station, or “poetic seat,” as Burgess calls it, is the porcelain throne itself. The choice is both meaningful and efficient: It is meaningful as a metaphor for the often painful struggle of the writer to actually produce anything. It is efficient because, although Enderby the man can rarely “go” successfully, Enderby the writer makes use of the bowl beyond its traditional function. In one passage, his failed drafts are “crumpled into the wastebasket on which he sat.”

Burgess, it should be noted, is the poster-child for preferring strict metaphor to simile. Although it creates more work for the reader, who sometimes has to puzzle out what is meant, the mental toil pays off. That quoted phrase above about the wastebasket would have been mundane if Burgess had written that Enderby tossed the draft “into the toilet as if it were a wastebasket.” Because Burgess lets the toilet simply be a wastebasket, the image is more powerful.

Do not think, however, that this approach of bathroom fixture re-identity is in the interest of delicacy. Remember, the novel does start with a fart.

Burgess’ first line could not be more appropriate for the story of a writer seeking recognition. Enderby struggles to produce what he thinks of as worthy writing. When he writes at all, he scrawls on toilet paper. His current project is a huge epic poem, which he amasses by collecting non-execrable lines (those he deems worth saving from a swirling, watery grave) in a mournful heap of TP squares in this bathtub. As a result of this unique editorial method, Enderby also cannot bathe, and so the cycle of self-loathing is reinforced.

Flatulence also drives people away. Just as Enderby is alone and lonely, writing is a solitary job. The obsessive practice of it, like the overconsumption of pinto beans or garlic, can render the writer socially toxic.

Inside Mr Enderby is not only a hilarious and bittersweet portrait of a fictional character. It is also a truthful, humbling reminder to all of us writers: from Shakespeare on down, our words are nothing but flatulence of mind and spirit. Only some do not, shall we say, smell as sweet as others.
Posted by Anne E. Johnson at 3:32 PM No comments: