Before I introduce our guest, a quick reminder: Stop by often in June! I've got two novels coming out, so there will be all manner of blog parties and giveaways around here.


Also, you can now pre-order the print version of Green Light Delivery via Kickstarter, and get awesome alien swag! 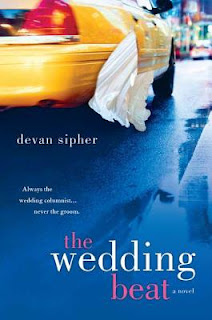 And now, without further ado, I'm honored to present Devan Sipher, author of the novel The Wedding Beat, released in April by Penguin. He reminds us what important work it is to write a book. Enjoy!


“Times are bad.  Children no longer obey their parents, and everyone is writing a book” —
Is it only me, or does this quote make you picture marble shelves overloaded with remaindered books in ancient ?

There were almost 300,000 books published in 2011.  In the .  Add the rest of the literate world, and the number jumps to nearly two million.  And that’s just in one year.  That means there must be at least five million authors on the planet.  More likely the total is closer to ten or twenty million.

So what is the point of writing a book?  What are the odds of coming up with a manuscript that’s uniquely compelling if there are so many people endeavoring to do the same?  It’s enough to make me almost pity publishers.  Almost.

When I was young I thought my writing could change the world. (I was very young.)  Yet I still yearn to contribute to society and wonder if I should have chosen a more directly useful profession:  like doctor, carpenter, or cable repairman.

Instead, I have written my first novel, The Wedding Beat, a romantic comedy loosely based on my experience as a single guy writing the wedding column at The New York Times.  It’s a lighthearted beach read.  Yet there was nothing lighthearted about my approach.  I slaved at my computer 12 to 15 hours a day, 6 days a weeks, working through back injuries, power failures and a rotating cast of Presidential candidates.

I was determined to write the best book possible.  More than that, I wanted to provide readers with the best experience possible.  Because that’s what I consider my primary obligation.  I believe there’s an unwritten contract between writer and reader.  A sacred oath, if you will, that I, as author, do solemnly swear not to bore you or insult your intelligence.

But if I’m being honest, there was another motivating factor.  And it had nothing to do with other people’s enjoyment reading my book and everything to do with my own enjoyment writing it.  In the past, I’ve been disdainful of people writing merely because it made them happy.  I mean, that’s lovely for them, but what about the poor sap who has to read what they disgorge?

I clung to the notion that writing required selflessness, and a fair amount of suffering, before it was worthy of being bestowed on readers.  But writing isn’t something bestowed, it’s something that’s shared.  And what I’m sharing is the joy and pride I take in crafting a story and conjuring a world in the rhythm of words.

I still remember the lightheaded euphoria I felt on the day I finished my manuscript.  If there are ten million people who derive similar pleasure, then so be it.  After all, it was Cicero who also said “A room without books is like a body without a soul.”


*  *  *
You can visit Devan Sipher at his website.  You can purchase The Wedding Beat on Amazon, Barnes and Noble, and elsewhere.
Posted by Anne E. Johnson at 8:10 AM