I know you'll enjoy today's post, by a fellow member of Broad Universe, Morgen Rich. She has some very positive advice about finding inspiration for writing by doing what you enjoy. 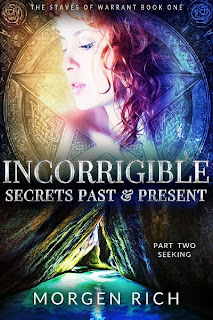 Thanks for having me as a guest, Anne! I’m Morgen Rich, and I’d like to tell you a story—a story about how the “how to write” light bulb went on for me.

In the acknowledgments of Part One of Incorrigible: Secrets Past & Present, I thanked the roleplaying community for helping me unleash my imagination. I meant that sincerely. Roleplaying has taught me as much about what I needed to know as a writer as reading and practicing writing.

With the help of others, I “built” the first setting for Incorrigible in a virtual world. In that medieval fantasy landscape, I plopped down my avatar on a rock near a river or in a hidden cave while I wrote a lengthy tale about a girl whose life didn’t turn out quite the way she’d planned. When I wasn’t writing, I was serving as Lead Game Mistress for the roleplay. Although I’d roleplayed for a long time, being a Game Mistress for a large group of talented roleplayers was a challenge. I learned a lot about plausibility, details, planning, and pacing.

The environment in the simulators (we had grown to 6 in less than 2 years) was constantly shifting. Disasters, natural and manmade, were my excuses for tweaking this village or that mountain trail. All the while, I continued writing the tale about the girl but never felt like I’d nailed the story.

After about two and a half years, I hankered to build a setting that was completely different and develop a roleplay challenge that would throw not just the unexpected, but the truly unknown, at the players. I came up with an idea for an environment the size of an entire simulator. The problem was that the “ground” on the simulator was already filled an established environment, and I didn’t want to disrupt roleplay or forewarn. So, I looked to the sky, where I secretly built a sim-sized setting for a quest called What Dreams May Come. What was significant about the Dreams setting was that it wasn’t a magic zone. It was a whole different world!

While I built that world, I made up backstories for the objects in it and the non-player characters who would populate it during the quest. The Dreams environment didn’t just look different; it had different rules!

As I worked to write a challenging roleplay quest and environment, a single thought gnawed at me about the tale I’d been writing. It dawned on me that it, like quests on the simulator’s ground level, was too restricted by setting. Nobody would care if the girl’s life didn’t turn out as planned. NOBODY’S life does! So, three years into the medieval fantasy project, I burned and buried the ashes of five manuscripts. I reformatted my hard drives.

All the experience I’d gained in roleplaying, in being a Game Mistress, and in being a virtual world builder suddenly came to bear on my writing in a dramatic way. The girl needed different challenges! The environment needed to be crisp and vast! The worlds needed rules! Conflict needed to be significant! Themes needed to matter! Characters needed to come to life . . . and death! 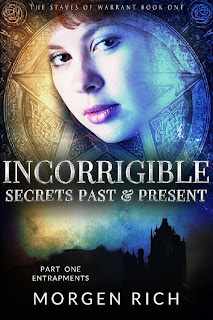 And then I wrote the story that wanted to be told. I set it in a universe that was constantly shifting (like the simulator landscapes had over time) with out-of-sight worlds that worked according to their own peculiarities. The first draft of Incorrigible weighed in at about 135,000 words, and I wrote it in 30 inspired days.

Incorrigible is a story and setting I’m continuing to build on as I write Books Two and Three of The Staves of Warrant. I’m enjoying every minute of skipping around the Shifting Worlds universe . . . and I owe it all to roleplaying!

*  *  *
You can learn more about Morgen Rich and her Shifting Worlds universe at her website and blog. Parts One (Entrapments) and Two (Seeking) of Incorrigible are available as ebooks at Amazon and Smashwords.