My middle-grade medieval mystery novel, Trouble at the Scriptorium was published in 2012.  For those of you who haven't read it yet, I thought it would be fun to introduce you to one of its main characters. 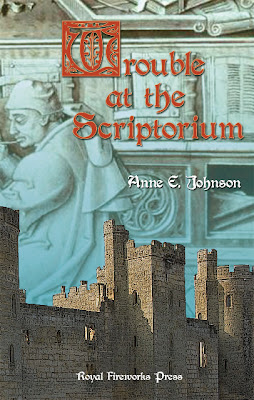 Trouble at the Scriptorium takes place in a rural castle in England in the early 13th century, and focuses on Harley, a twelve-year-old servant at the castle. Harley discovers a number of odd things going on in the Shire of Hertford, and he enlists the help of the beautiful Lady Margaret, also twelve, to put all the pieces together.

Lady Margaret was kind enough to share some thoughts about her life and adventures:

*   *   *
My name is Lady Margaret. I am the only child of Sir William of Castle Berkhamsted, just north of the City of London. My father, in turn, serves the great Lord Edmund of the Shire of Hertfordshire. Lord Edmund, in turn, is bound in service to Henry III, King of England.

Did you get all of that?

My mother’s name is Lady Ursula, and her name day celebration is in one week. That’s the special feast day for St. Ursula, whom my mother was named after. It should be a joyous occasion. In fact, the entire village of Berkhamsted is preparing to eat, drink, and dance in my mother’s honor.

But two awful things happened today that could ruin her name day.

First, she got word from my grandpa, Count Heinrich of the Rhine, saying that the family gems, her inheritance, have been stolen. Everyone thinks they were taken by the notorious thief, Hermann the Bald. But no one even knows if he’s still in Europe.

And then our servant boy, Harley, brought told me even more bad news, a secret we hope to keep from my mother: There’s a beautiful book of Gregorian chant Father hired a scriptorium to make as a name-day gift for Mother. However, Harley’s seen it already (his uncle is a monk), and he says one of the paintings it’s supposed to include is missing, and some of the musical notes are written wrong. Oh, my poor mother will be heartbroken if we can’t get this fixed in time!

Here’s something even more odd and disturbing: Harley thinks the missing jewels and the incorrect chant book are connected. He’s convinced the book’s errors are some kind of code. And he visited the scriptorium where the book was made, and says the monks who work there are acting suspiciously.

Still, Harley’s just a servant boy, so what would he really know about things like this? He’s promised to show me a page he cut from the book, which is wise choice, since I’m very good with puzzles. My tutor, Professor Al-Zarkali, may be able to advise us, as well.

Somehow, we’ll figure out this mystery!

*   *   *
Trouble at the Scriptorium is available as a print book directly from the publisher: http://www.rfwp.com/browse/novels
Posted by Anne E. Johnson at 8:29 AM