Susan P. Baker on using her law experience for the suspense novel UNAWARE

Any one of us can end up the victim of a crime. Today's guest, Susan P. Baker, took inspiration from her experiences as a lawyer for her novel Unaware. If this essay is any indication, get ready for some major suspense! 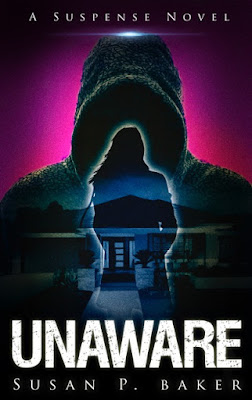 UNAWARE is loosely based a case I handled when I first started practicing law. At the time, I was married to my first husband. We were the parents of two young daughters. My husband traveled a lot on the job, which was necessary but could be annoying when I was trying to get a law practice off the ground and parent the children at the same time. We did not have an au pair, couldn’t afford one. My father had been an attorney but was on the bench when I won my law license.

One night, when my husband was out of town, I went to a meeting and was out too late. The girls were old enough to stay by themselves. I stopped off at the grocery store on the way home and noticed when I was almost to my house that a car had been following me. When I pulled into my driveway, the car stopped and parked in front of the house opposite mine. I immediately backed out and drove away, hoping to lead the person away from my children. We didn’t have cell phones back then. I drove a short distance to my sister’s house, jumped out, and ran inside.

My brother- in-law drove to my house to check things out while my sister and I called the police. When they found no one there, I went home, having become aware of how easy it would be for someone to hide around my house, what with the hedge next to the front door. I pulled into the garage, put the door down, ran inside to check on the girls who were okay, and got the butcher knife out of the drawer and put it under my pillow. We didn’t have any guns. I had a hard time sleeping that night. The following day I bought a .38 revolver.

At that time, I was building my family law practice as well as practicing criminal defense law. I shared an office with two of my father’s former law partners. They were much older and often gave me advice. One of them had the messiest office I’d ever seen, but he had a brilliant mind and could cite law that I’d never even heard of.

In one of my cases, a beautiful, young woman with long, blond hair came to see me about her situation. She hadn’t been married to her husband very long but was ready to get out because he’d become violent almost as soon as they’d said “I do.” He worked on the wharves and had a very sharp cotton knife that he threatened her with when she spoke of leaving him. He was a few years older than she was and fairly good looking. His father was a big-wig in the longshoreman’s union and had bailed him out of trouble many times.

I took the case against the advice of the other lawyers because she didn’t have much money and had been turned down by other lawyers who were afraid. It wasn’t long before she told me that her husband threatened to kill her and me. We tried our best to settle the case amicably. The man’s father even came to see me in my office. He knew my father. He said he’d make his son settle the case, pay the money he needed to pay, and he even gave me a pendant of a gold leaf. Anyway, clearly the inspiration for UNAWARE came from my law practice.

What you don’t know CAN hurt you.

Frustrated with the two controlling men in her life, Dena Barlow Armstrong has outlined a rosy future for herself and her children, independent of them. Her husband, Zack, constantly pushes her to turn over her inheritance to him and, when she doesn’t, he punishes her with his indifference. Her law partner and cousin, Lucas, controls her money and the types of cases she accepts.

Just as Dena begins to achieve her goal of independence, someone emerges with very different plans for her. Unaware of the danger she faces, Dena lives each day as a wife, mother, and attorney. Then one day, when her husband is out of town, the stranger lurks in her garage, waiting until she and the children go to bed…

Learn more about Susan P. Baker on her website.