I am pleased to welcome Lisa Marie Latino, whose novel Ten Years Later offers the story of a woman who discovers her strength and adaptability.


Ten Years Later is about a girl that most people, especially millennials who are trying to find their niche in the “real world,” can relate to. 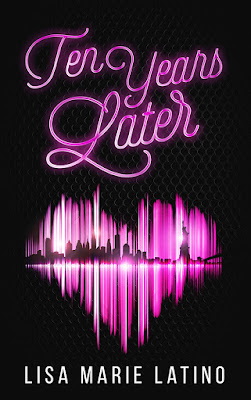 We first meet Carla D’Agostino while she’s in the throes of a major quarter-life crisis. To add fuel to the fire, she realizes her ten-year high school reunion is fast approaching, and her frustration multiplies when she starts comparing herself to her “more successful” peers. Ten Years Later follows Carla throughout her year-long journey of “perfection” for the big night, and we see the highs and lows of what that entails.

I went through various periods of self doubt in the years after college.  I, too, was single, still living at my parents’ home, and went through some very trying times that all entrepreneurs do while forming their own businesses.  As I opened up to others about my frustrations I realized that nearly everyone, no matter their circumstance, was dealing with the same insecurities. That theme-- visions of what one thinks life SHOULD be versus reality-- really inspired me, and since I've always wanted to write a book anyway, I channeled that angst into writing Ten Years Later.

A lot of readers assume Carla and I are the same person because we share a similar background and common interests; we're both New Jersey-based sports fans that are of Italian descent. Obviously, I drew on a lot of my life's experience in shaping a relatable fictional character, but Carla has her own set of unique circumstances that represent the plight of driven millennials everywhere trying to claim their stake in the world.

The book was originally written for millennial women in their 20's and early 30's who are struggling to find their way; I wanted Ten Years Later to be their beacon of hope and motivate them to accomplish their heart's desires. But as I’m getting to know my readers, I’m realizing that they come from all walks of life. High schoolers to middle-aged men have read and loved the book because any one of its given themes has resonated with them. To write a book that can touch a wide variety of people is very fulfilling.

Carla D'Agostino is not your typical heroine. Stuck in a seemingly dead-end job, single, and still living with her overbearing Italian-American parents, Carla is thrown for a loop when she realizes her ten-year high school reunion is fast approaching. True love, a career as a sports radio talk show host, the perfect body--every dream remains frustratingly out of reach no matter how Carla strives and schemes. Out of reach, that is, until unexpected events lead her right back to where she started, and Carla discovers that all she ever wanted was right in front of her the whole time. "Ten Years Later" is a witty, unpredictable tale of one ordinary young woman's race for the top as she throws caution to the wind and decides to go for her dreams.

Ten Years Later is available in paperback and as an ebook.
Posted by Anne E. Johnson at 8:00 AM