Regina Jeffers on Balancing Fact and Fiction in Historical Novels

Pehaps the biggest challenge of writing historical fiction is balancing fact and invention. Today's guest, author of the REALM series of historical novels, discusses this issue. 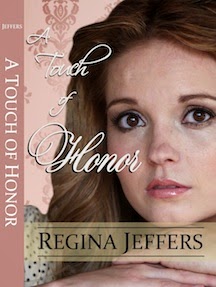 between writing a good story and getting the historical details correct. It is a balancing act to share one character’s foibles and flaws, as well as the qualities about him, which we admire. For me, I like to add another element: to mix in “modern” issues the reader might not expect in an historical novel.

A Touch of Honor is the seventh book in my highly popular “Realm” series. The Realm is a fictional covert group working under the auspices of the Home Office during the Napoleonic War. Each of the members of the Realm has left the service and has returned home to claim titles and land and, hopefully, love. However, a Baloch warlord, who believes one of them has stolen a fist-sized emerald he wants, returned to his land is pursuing them.

For “modern” issues, the characters have met a variety of concerns. In The Scandal of Lady Eleanor, Lady Eleanor Fowler knows a deviant parent, who has placed her in a tenuous abusive situation. In A Touch of Mercy, we see how far a family will go to marry off their daughter to a man of wealth and consequence. In A Touch of Love, cultural assimilation in Regency London is part of the plot. In A Touch of Honor, the reader encounters the idea of “eating disorders” in a time when women were corseted into their dresses, as well as dependency on laudanum, a tincture of opium administered to babies and adults alike during the Regency and Victorian periods.

Into these story lines, I have mixed the history of the time. The reader will discover something of the glass cones, a 19th century structured used in the glass manufacturing process, in A Touch of Cashémere. The Peterloo Massacre plays a part in both A Touch of Love and His: Two Regency Novellas. Lord Sidmouth’s search for sedition in post Napoleonic London becomes part of several plot lines. The reader has met such real-life characters as John Loudon McAdam, who developed the road system, which changed the face of England, as well as Sir Walter Scott as a close friend of one of the characters. One can also find the Pentrich Rising as the backdrop for A Touch of Love. The list is lengthy and diverse.

Book Blurb:
For two years, BARON JOHN SWENTON has thought of little else other than making Satiné Aldridge his wife; so when he discovers her reputation in tatters, Swenton acts honorably: He puts forward a marriage of convenience that will save her from ruination and provide him the one woman he believes will bring joy to his life. However, the moment he utters his proposal, Swenton’s instincts scream he has made a mistake: Unfortunately, a man of honor makes the best of even the most terrible of situations.

SATINE ALDRIDGE has fallen for a man she can never possess and has accepted a man she finds only mildly tolerable. What will she do to extricate herself from Baron Swenton’s life and claim the elusive Prince Henrí? Obviously, more than anyone would ever expect.

ISOLDE NEVILLE has been hired to serve as Satiné Aldridge’s companion, but her loyalty rests purely with the lady’s husband. With regret, she watches the baron struggle against the impossible situation in which Miss Aldridge has placed him, while her heart desires to claim the man as her own. Yet, Isolde is as honorable as the baron. She means to see him happy, even if that requires her to aid him in his quest to earn Miss Satiné’s affections.

Learn more about Regina Jeffers on her website and on her blog.

Purchase A Touch of Honor at Amazon and Barnes & Noble.