My guest today is Sandra Barret, whose latest work is Blood of a Traitor, Book 2 in her Terran-Novan Universe series. Here Sandra discusses a very difficult question: how the concept of culture might be used in futuristic sci-fi.

How Writing The Other Taught Me "You know nothing, Jon Snow" 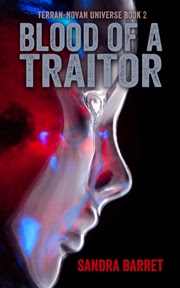 Okay, I'm mixing my metaphors (and my genres here), but that Game of Thrones expression so perfectly matches my reality after trying to write about someone from a culture different from my own.  My latest science fiction novel, Blood of a Traitor, has two main characters.  Kay is short, sarcastic, and a little too much like me (or my inner me anyway). And then there's Ayaan - tall, African, and Muslim (or a version of Muslim I extrapolated from current liberal Muslim trends).

I did my research like a good little writer. I got books, I hunted blogs. I created a character that I felt was well rounded and represented someone who isn't common in our stories.  After sitting through the Arisia convention's panel on Writing for The Other, I realized I fell short of the mark.

I did focus on one item that was critical to Ayaan.  She chose to follow her religion when family and the military frowned on it. It was core to who she was, and that I think I represented well.  Where it weakened was in the supporting cast of characters.

Now before I continue to bash my own book, I think the story and characters are great (call me biased).  But for my own goal and what I set out when I created this book? Yeah, didn't quite make it.  I fell into a few common holes. The biggest one, I like to call "Why Aren't There Kenyans on Pluto" (referencing comments from that Arisia panel).  The mistake I made was to assume that some far flung future, complete with human genome enhancements and galactic space travel, would automatically strip away major cultural differences.  My story cultures are different, but on a planetary scope. Within the planet, each is homogenous.

One recommendation from the panel was to evaluate the Jewish culture, as something that has spanned millennia, experienced wide scale Diaspora, and yet both retained and shed aspects of what was core thousands of years before.  And then recognize the differences within that culture. It too is not monolithic. People mingle with other cultures, adopting parts here and there.

So for my next book in the series, I hope to be less like Jon Snow....and maybe I'll put Kenyans on Pluto? Side by side with Canadians, Brazilians, and an alien or two. Or Brazilian aliens, or Kenyans who integrated cultural aspects of those aliens.  They may self-identify as Plutonians to outsiders, but amongst themselves, don't strip away their heritage. Keep it, enhance it, and let the characters be real.

You can purchase Blood of a Traitor on Amazon as print or e-book.