*   *   *
Thanks for having me take over your blog today, Anne.  Let’s talk characters.  Sometimes my characters don’t listen to me.  That might sound silly, since they come out of my brain, but it’s still true, the little bullies they are.  I don’t plot any aspects of the story.  I begin with a list of names, a general storyline, and a pretty clear idea of who my characters are in my head, and let the puzzle come together on its own as I spill out the story.

Once in a while someone I was certain should go left ends up going right.  Instead of funny, they’re serious.  Instead of the hero, they become the villain or vice versa.  I ran into a zig-zag with two characters in Stone Chameleon, though I’ll only mention one in this post.  It ended up being a big head-scratcher for me, especially since I’m a person who hates do-overs. 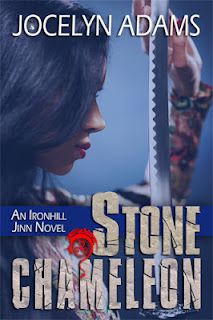 I started out wanting Amun Bassili, Lou Hudson’s potential love interest in book one, to walk that fine line between love him and hate him.  I wanted him strong, arrogant and charming as hell.  He is that, but an aspect of his personality came out that I wasn’t expecting.  A soft side, a vulnerability I didn’t know what to do with.  He’s a complicated character, driven by instincts that are unusual, from another culture that’s difficult to understand by those not living it.

My beta readers hated him.  I pondered for days what to do with him.  How to walk that razor’s edge and keep him on the love side of that love/hate line.  His issues kept me up, my stomach in knots, because I needed him to be a core figure in the series.  If I couldn’t get him right, then the foundation of the story would crumble.
At first I thought I’d have to rip him out and start over from scratch, but then I realized it wasn’t truly him that was the problem.  It was his culture and the readers’ understanding of that culture.

The instincts of his species are beautiful and natural to him even though readers found them hard to accept.  I realized I hadn’t painted his background and upbringing well enough for the readers to understand why he did/said the things he did.  Once I figured out what the problem was, it took only a few passages, adding some color and texture to his story and personality, and a few lines of additional dialogue, to bring him back into balance.

After I finished with my edits, he seemed completely different even to me.  He became more real to me, and, after a second round of beta testing, my readers agreed.  I really hope I never get myself into that big of a pickle again, but since I have at least a zillion more stories spooling in my mind, I highly doubt it.  J


I’d love to know who your favorite character of all time is.  What did you love about him or her?  Drop a note in the comments and chat with me.