Anne-Adele Wight on turning picture to poetry to story

Poet Anne-Adele Wight just released her chapbook, Opera House Arterial, a poem cycle telling a series of stories about the life and adventures of an opera house. Knowing that her first book, Sidestep Catapult, is a collection of richly textured but separate poems, I asked Anne-Adele to talk about how and why she produced this new work as an almost-narrative set. 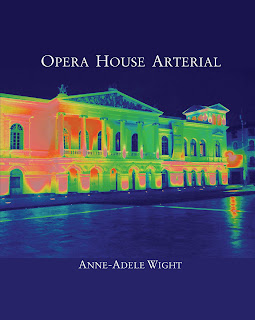 Tangling with a Trickster
Opera House Arterial (BlazeVOX, 2013) is a mythology in 56 poems. The focus is a trickster spirit in the form of an independently mobile opera house. It chooses different modes of travel: flying, swimming, crashing through trees, manifesting in a couple’s bed. When weary of traveling it hangs out under a bridge and gnaws bones. This entity is up to no good, so beware.

When Opera House first showed up it didn’t feel like a narrative. In 1983, a friend showed me a postcard she’d received from Ecuador. It showed a view of Teatro Nacional Sucre, the 19th-century opera house in Quito. Buildings in the foreground made the opera house appear to be floating, and the Andes rose high in the background. I responded on a sensory level with the urge to write a poem. The unreal quality of the postcard made me see the opera house as hallucinatory; the poem would revolve around that hallucination.
My first thought was that two people would hallucinate the same opera house at the same moment, without communicating and possibly in different places. But how to convey that thought? I couldn’t make the poem stick. So I put my idea in the usual black hole and left it there a long time.

In 2011 I finally realized I was dealing with a collection. The insight came during a surreally long afternoon at a racetrack, where I’d gone under duress and was bored to extremes. I pulled out the notebook I always carry, and suddenly the opera house was staring me in the face. I began to scribble notes––not poems, but their raw material, the poetic ore.  I took them home, let them process themselves for a while, and the book took off.

I let the notes sit for about three months while I published another collection and lived my usual life. One day I pulled them out and started writing. The first completed opera house poem opened the way for another and then another. Sometimes the poem would overtake me and I’d write a draft or fragment in my notebook. Sometimes I’d sit down at my desk with no particular idea, pull out my notes if I had any, and start typing. Opera House gestated for about nine months, a perverse mythical infant.

Most of the book isn’t a linear narrative; each poem tells a small, discrete story. However, the last six poems link together to show the opera house kicking off an apocalypse––all in fun, of course.
The writing process was so delightful that finishing left me with mixed feelings. As soon as BlazeVOX accepted Opera House I started wondering about the next book. Could I do it the same way? Could I do it at all?

I tell myself I can do it again. The process will be different. This part is an act of faith: believing there’s more in my head than is apparent from a surface perspective. I have no encompassing vision so far, only poetic fragments and a folder of pictures I’ve downloaded that intrigue me for some reason. Lots of odd colors, lots of sky. I’m not sure where the pictures fit in, but I do know they have a place in whatever happens next. Whatever it may be.

You can purchase Opera House Arterial directly from BlazeVOX or on Amazon.