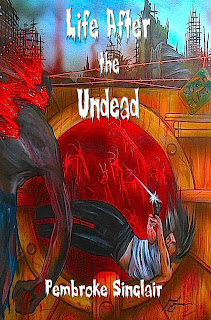 Today's guest, Pembroke Sinclair, discusses the writing of many genres (I can sure relate to that!), and the joy of focusing on Zombies. Read it if you dare.


An Array of Genres
I love to write.  Period.  If I don’t write, I get really grumpy and am quick to temper.  Ask my family, they’ll tell you all about it.  It doesn’t matter what I write, as long as I write.  I’ve written romances (not ones with a capital R, but there have been relationships in my stories), horror, sci fi, fantasy, Westerns (not traditional ones like Louis L’Amour, but stories based on life in the West), along with nonfiction articles about agriculture and serial killers.  I have children’s stories coming out later this year, as well as religious horror novellas and a nonfiction book on slasher films.
I’ve often wondered if I should narrow my focus down to one genre.  After all, Stephen King is the master of horror, Anne Rice is known for vampires, as is Stephanie Meyers, and J.K. Rowling cornered the middle grade fantasy market.  But then I think:  won’t I get bored?  Do I really only want to write about zombies for the rest of my career?  Or distant planets?  I wonder if any of the authors I just mentioned get tired of writing the same thing over and over.
I think I’m new enough to the publishing game that I am allowed the freedom of experimenting and exploring different genres.  Besides, even the authors I mentioned previously didn’t always stay in the genres they became well known for.  Stephanie Meyer has a science fiction novel.  One of King’s greatest works of all time is the Dark Tower series, which is a cross-genre series.  Just because a person becomes famous in a certain genre doesn’t mean they have to stay in that genre.
I like to experiment.  I like to try writing in different genres and see how they do.  It challenges me to become a better writer.  While I really like zombies, I don’t want them to be my only focus.  That’s limiting.  I want to be able to spread my writing wings and explore what I want to explore.
However, just because I like to explore different genres and experiment with writing, that doesn’t mean I don’t have favorite genres.  I do actually prefer to write in the sci fi or fantasy genres.  Horror is all right, but it takes a lot to scare me, so I don’t think my books are overly frightening.
My most recent attempt at horror was my young adult zombie novel called Life After the Undead.  It is my most recent book (it came out in 2011), and the sequel, Death to the Undead, is scheduled for publication in May.  Even though horror isn’t my favorite genre to write in, so far, this is my favorite series.  I really got into the characters and had a great time with them.  They always surprised me with their reactions to certain situations.  They definitely took the story and made it their own.
*   *   *
You can purchase Life After the Undead on Amazon and eTreasures.
You're also invited to visit Pembroke Sinclair's blog.
Posted by Anne E. Johnson at 8:15 AM