In ancient Greek mythology, Argos is the original peacock, a creature with hundreds of eyes on his tail. Athena put them there so he could watch over her treasure. Recently I found a new job for Argos: as a story draft-reader. 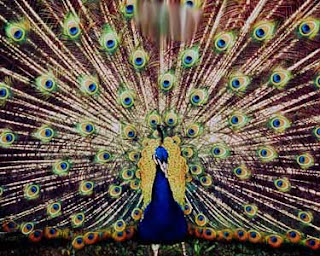 I'd read my new story over and over, of course. Then I sent it to some of my trusty guinea pigs to see what they thought. I'm blessed with a cadre of smart, literate folks with good critical skills whom I can call on to look at my stuff. Three of them read my story and loved it, just catching a couple of typos. I was ready to send the story out. Then reader number four sent an email.
"This character seems to be a split personality. He has two different names."
Sure enough, in my indecision, I had named one character twice with two similar names. I'd used those names alternately throughout the story. No one else had caught it!
So, friends, be sure you have an Argos of a reading team, with as many eyes as possible looking from all different angles. You'll be amazed what they can see.
Posted by Anne E. Johnson at 8:42 AM