Margo L. Dill on Digging Up a Historical Topic

One of the great things about inviting blog guests who have experience talking to kids, is that they tend to explain things well. Margo L. Dill is one such author, who gives us a clear and candid peek into her process of coming up with a topic for her middle-grade historical novel, Finding My Place. 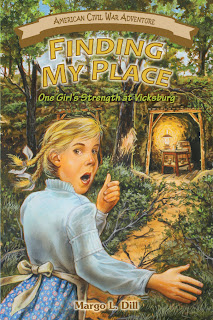 When deciding to write a historical fiction novel for 9 to 12 year olds set during the Civil War, I had to do some serious digging for a potato idea. I wanted to write historical fiction that teachers and home school parents could use with children—these were the books I liked to use with students when I taught fourth and fifth grade. But do you know how many Civil War books there are for this age group? Too many to count.

Then I read a tiny paragraph in a fifth-grade social studies book about some citizens in Vicksburg, Mississippi who did not want the Yankee army to capture their city, and so they were under siege for 47 days. They lived in caves and even ate rats to survive. What determination! The potato was starting to grow in my mind—although it was still just a baby red.

After reading and researching Civil War books for this age group, I realized many are set in the North or told from the point of view of a Yankee soldier. The children are usually drummers in the army or pretending to be older so they can be a soldier—and most are boys. So, what could I do to really change things up? I could create a female main character and make her Southern. And she would have nothing to do with fighting in the army—she’s a citizen, trying to survive a 47-day siege. Okay, now the potato was starting to get big enough to bake and serve with a ribeye steak.

But I still wasn’t ready to write. Historical writers have to do research, of course—and primary sources and visiting the place (even if it’s virtually) of your setting are essential. I was lucky to find a book STILL published, written by a woman who lived during the siege! I also visited Vicksburg (three days after the 9/11 attacks, but that’s another story) and saw the Mississippi River and its banks, the battlefield (now a national park), museums, library vertical files, and homes with damage and even an unexploded cannonball! I talked to experts on the siege; and finally, I came up with the idea for my book: Anna Green has two siblings—her mom dies during a bombing and her dad is fighting for the Confederate Army. So now she is the head of the household. What will she do? Will she be able to take care of her siblings in a cave for 47 days? Will she allow her pushy, bossy neighbor, Mrs. Franklin, to take over? Will her brother and father come home?

Once I had a potato idea AND enough research to back me up, writing the book became much easier—although it’s still one of the hardest things I’ve ever done. I think sometimes as writers we are stuck when we don’t have our idea fully formed, and we need to give it some time to grow while we dig a little deeper.

After April 1, you can purchase the book from Margo's website, Amazon, and Left Bank Books.