I'm thrilled to welcome back picture book author Claudine Gueh Yanting. Her latest book, Brightness Sailors, Bit by Bit, is a bittersweet poetic text about a girl trying to keep her grandmother from drifting away from the real world and memory. Claudine talks here about getting to know her main character. 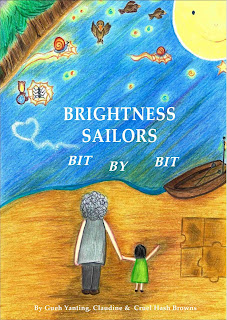 A SPECK OF ME, A RIVER OF HER

En, my main character in BRIGHTNESS SAILORS, BIT BY BIT, was a seven-year-old who sailed out to relight her grandma’s dark and troubled stream of thoughts. En pushed the boat out alone, her determination as clear as the sky was black.

And off she went, my little heroine.

Who wasn’t a watcher but a doer.

Who did not sit and cry when sad things happened, but went out and made things brighter.

En was so different from my real seven-year-old self (I was more Ramona-on-her-sulky-days) I was worried I might not know her deeply enough. Like every writer then, I carried out imaginary conversations to seek more answers.

First, I spoke to myself:

Don’t turn her into who you wish you had been. (All right, all right … just not entirely, you clear? Let her be a speck of you, and a river of herself.)

Don’t make her out to be Super Girl 99. She’s only seven, and she’s losing her closest family. Do you not think she’s terrified?

…
Then En spoke honestly to me. It was strange she sounded older and more independent than her age. Yet I couldn’t take those traits from her and I didn’t want to change her age. Seven felt right, and En was different, remember? So I let her be her. Here’s what she told me before I wrote her story in verse:

I’m scared. It’s so dark. But then I try not to think about it. Finding Grandma is more important.

And later, when she was in the middle of the stream:

The waves are sneaking higher, b…but I’ll try to ignore them. Reaching Grandma is more important.

Trying and doing – that was En’s way of coping. She sailed out alone. She released Brightness from a sack. She rowed on when the waves grew harsher, letting her insecurities show bit by bit through her environment and not through her. She stayed strong, as advised by the spiders in the sky. She smiled despite the wreck. Who knew seven-year-old protagonists could be this cool?

En was afraid, but she didn’t show it much or stray because of it. I’m very proud of her, my little heroine. I hope her Brightness reaches you.

Learn more about the book and about Claudine Gueh Yanting at CarryUsOffBooks and Goodreads.

To celebrate its release, Claudine has a gift for everyone called ‘A Little Book of Brightness.’ Please remember to check it out. Thanks for reading!