As a fiction-writer with one foot in the world of journalism, I am especially interested in this guest post by Christina Hoag. But hers is a type of hardline reportage much different from my own experience. For Skin of Tattoos, she found inspiration in an element of society that most of us hope to avoid. But we're thrilled to read about it! Welcome, Christina.

*   *   *
What inspired me to write Skin of Tattoos
by Christina Hoag 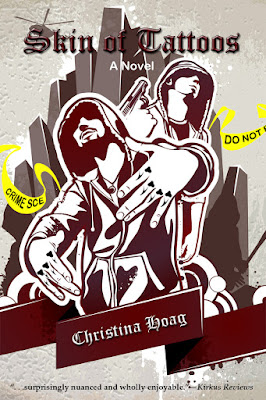 Skin of Tattoos is set in the gritty underbelly of Los Angeles’ gangland, the darker side of the palm-studded, movie-star lifestyle that L.A. is known for the world over. Why, readers have asked me on more than one occasion, did you write about gangs?

In 2000, I was sent on a magazine assignment to El Salvador for story about gang members deported from Los Angeles to their birth country, which they identified with, but really didn’t know because they had left, fleeing the 1980s civil war, when they were infants and small children. Some of them barely spoke Spanish.

Growing up in L.A., they had joined gangs to protect themselves against long-entrenched Mexican-American gangs who didn’t welcome outsiders. But because the Salvadorans weren’t U.S. citizens, they later were vulnerable to deportation when the government started cracking down on immigrants with criminal records. The stories of the young men I interviewed, who were basically stuck between worlds, struck me as an unusual outcome of both a civil war and an immigrant experience. I tucked it away in my mind as a great premise for a story, and a couple years later, I wrote an outline for a novel and stuck it in a drawer.

In 2008, I became a reporter for the Associated Press in Los Angeles and ended up covering gang issues. I dusted off that old outline and started writing, although I stopped and started many times, not confident that I could pull it off. I got a lot of encouragement in writing classes I took, however, and eventually finished it.

I then ended up collaborating on a nonfiction book with a former Black Panther who had formed a programme to turn former gang members into community peacekeepers with the aim of stopping the cycle of retribution that drives gang violence. That book, “Peace in the Hood: Working with Gang Members to End the Violence,” is now being used in several universities as a textbook for courses that involve urban communities and policy.

After many rewrites and even more rejections, Skin of Tattoos landed a publisher and was published in 2016—sixteen years after I did those initial interviews in El Salvador. It was a long journey, indeed, but I learned valuable lessons: Write about something you’re passionate about so you don’t lose interest along the way and success is a lot about perseverance.

Los Angeles homeboy Magdaleno is paroled from prison after serving time on a gun possession frameup by a rival, Rico, who takes over as gang shotcaller in Mags’s absence. Mags promises himself and his Salvadoran immigrant family a fresh start, but he can’t find either the decent job or the respect he craves from his parents and his firefighter brother, who look at him as a disappointment. Moreover, Rico, under pressure to earn money to free the Cyco Lokos’ jailed top leader and eager to exert his authority over his rival-turned-underling, isn’t about to let Mags get out of his reach. Ultimately, Mags’s desire for revenge and respect pushes him to make a decision that ensnares him in a world seeded with deceit and betrayal, where the only escape from rules that carry a heavy price for transgression is sacrifice of everything – and everyone - he loves.

Skin of Tattoos is available in ebook and paperback from Amazon.