John McRandle on his unusual picture book for grownups, THE AWFULBET

There's little in life I admire more than weirdness and originality, preferably both in the same work. And so, it's my great pleasure to introduce you to the oddest picture book you're likely to see today, The Awfulbet, written and illustrated by John McRandle.

The Awfulbet: A Bracing Compendium of Disease & Effluvia For Grownups is an ABC book with a collection of 26 letters who endure a wide range of amusing afflictions. From Acne to Zombification, and all infirmities in between, each letter has been given an alliterative assortment of awfulness. For example, meet ‘B, who is Beset by Bunions, Baldness and Boils’, or ‘R, who is Ripe with Ringworm, Rosacea and Rabies’—the characters of the book possess a certain comical charm that will appeal to kids and grownups alike. 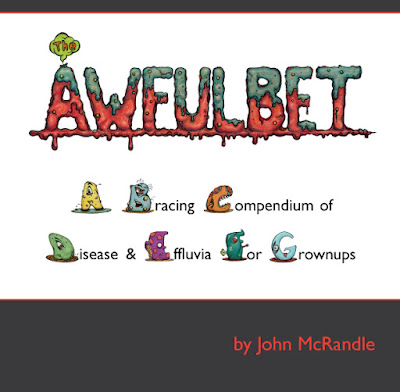 This is my first book, and my first foray into the world of self-publishing. Starting as a germ of an idea two years ago, the project came to me in a late-night burst of creativity. The writing was the fastest part, with the droll diseases flowing from my pen. But the illustration took a lot of time, as each letter’s illness had to be anthropomorphized and personalized to build the character. I suppose the genesis for The Awfulbet can be traced back to my youth reading Mad magazine and collecting Topps’ Wacky Packages, which fueled my interest in the sort of subversive humor that kids love. Some of my largest influences are Dr. Seuss, Edward Gorey, and Roald Dahl, as they play a huge role in my literary and artistic interests—and my love for darker and more disturbing work.

As a young person I was fascinated by the creatures you would find when turning over rocks, or the strange old things you'd find packed in the attic or basement that had been discarded by their owners but still had stories to tell. Growing up as the child of a German historian and an audiology professor, I always had an interest in language and science. We had a large library filled with art, natural history, and science books, and linguistic humor and wordplay were always popular in our house. What I hope to do with The Awfulbet is make something curiously creepy and grossly entertaining that appeals to the 13-year-old rock flipper and attic explorer in all of us. 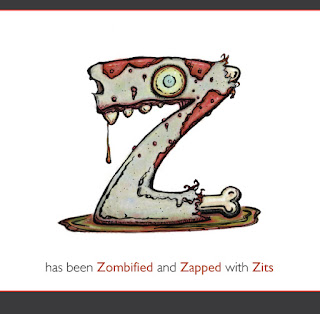 The Awfulbet: A Bracing Compendium of Disease & Effluvia For Grownups chronicles the sad state of affairs in which these endearingly ill letters find themselves. From Acne to Zombification, there is no end to the problems these troubled souls will endure.

This contagious interpretation of an alphabet book springs from the fevered mind of John McRandle, a New York-based illustrator and musician. Night after night, he toiled until the wee hours, delving into the lives of these 26 little creatures. Now, the fruits of his labor can be yours!

*   *   *
Learn more about The Awfulbet on the book's website.
You can purchase The Awfulbet from the Blurb bookstore.