J.L. Newton on the importance of environment in her novel OINK

We do love a touch of satire on Jester Harley's Manuscript Page, so it's a pleasure to have J.L. Newton with us today. The target of her humorous novel, Oink: A Food for Thought Mystery, is the world of universities. She wrote a very interesting piece for us about how the environment in your novel's setting can be far more than a backdrop. 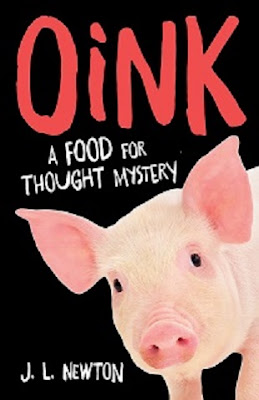 Making Environment a Character in Your Fiction
by Judith Newton

In writing Oink, a humorous send up of the university for its increasing devotion to self-interest, competition, and profit, I also wanted to emphasize the importance of values that are less about profit and more about the common good. I planned to do this, in part, through my characterization of Emily Addams’s campus community. It is comprised of faculty in women’s and ethnic studies who have come together to support each other and to resist having their programs defunded by an increasingly corporate-minded administration.

I wanted to do more, however, to engage the reader in positive feelings about community, and so I decided to suggest the interconnectedness of human and natural life in the very texture of the novel. To feel oneself in relation to the world of nature and to value the smallest forms of life are  precursors to valuing human community as well.

I decided that elements which appear as background—animals, plants, the weather, the seasons—could subtly enforce a feeling of interrelation. There are many animals in the novel, for example, both domesticated and wild, which just appear as the characters are carrying on their lives. As Emily drives to meet with the biologist Tess Ryan, who she hopes will have important information, “a single red-tailed hawk flapped twice, launching itself into air. The sight of a hawk’s glide always brought me to life, making me feel as if I too were capable of soaring.” Many of the characters also look like animals. The Chair of the English Department has a hound dog face which “seemed to sag into his tweed jacket.” The Vice Provost, with her long nose, resembles a hummingbird, and the greedy Peter Elliott, victim of the poisoning, is compared to a pig by another character—although the actual pigs in the novel are far more charming than he.

I named streets after animals or native California plants—Wild Deer Lane, Coyote Court, and Badger Crossing, Poppy Lane, Ceanothus Drive—and  I made the weather heighten people’s moods. Emily feels oppressed by the ninety-six degree heat as she realizes that, with the poisoning of Peter, something sinister has entered into the atmosphere at Arbor State. Later, she gets lost in a tule fog at night, making her feel even more depressed about her inability to discover the culprit.

In all of this, I wanted to be accurate. I studied the birds and animals of northern California, and I worked with a weather calendar from October 1999, when the novel is set, to capture how the weather really operated that month in that year. Knowing what hummingbirds really do inhabit northern California made me feel the kind of attention to and connection with nature that I wanted to instill in my reader.

I also set the novel at a time of year that would convey a message. Oink begins on October 11, 1999, in the midst of harvest and Indian Summer, and ends on November 1, El Dia de Los Muertos, which marks the coming of winter, the dying of leaves, and the diminishment of the sun, reminding characters of their own mortality. El Dia also celebrates those who have died, asserts the continuation of life, and demonstrates the power of communities to fortify their members against the forces of darkness and despair.  In the context of conditions such as these— conditions in which we all live—Oink poses an implicit question: do we spend our lives in an individualist pursuit of profit, or do we work toward more communal ways of being?

You can purchase Oink: A Food for Thought Mystery on Amazon, Barnes and Noble, and other online retailers.