I can't believe it's been a year since Graika and Lerris Rhellog started their adventure to find their Human roots on the planet Soranen. I'm delighted that SPACE SURFERS was published by Alban Lake; nearly 20 of my short stories have appeared their various magazines, but this was my first book for them.

SCROLL DOWN FOR GIVEAWAY FORM 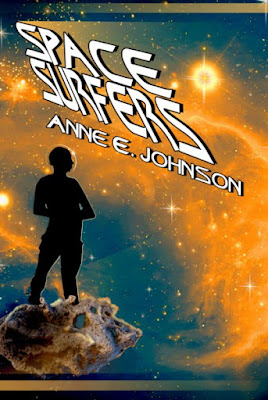 Teenage siblings Lerris and Graika of the planet Soranen want to go into outer space, an act forbidden by their people, the Sor. The Sor, it is believed, are the descendants of the Ellarisor and the Humans, now both extinct on Soranen. When Lerris surfs above the clouds in his minijet, he spots a vessel owned by Lorfallin, a chemical magnate. The ship is spraying a green mist that, it turns out, causes a disease which affects those with Human ancestry, including the siblings’ father.

Thus begins a journey to find pure descendants of the Ellarisor, whose blood might provide an antidote to the green mist. Along the way, Lerris and Graika learn the truth about their ancestry, and some truths about life. This prepares them for the final battle---against the Tust, who have engaged Lorfallin to destroy all trace of Human life. If they win, outer space may be open to them. But if they lose...


Would you like to win a print copy of Space Surfers? You must have a mailing address in the U.S. (international postage is soooo expensive!). I'd love to share Graika and Lerris' world with you.

Please share this contest with your friends. Entries open until Wednesday, February 8 at 11:59 pm Eastern. I'll announce the winners here the next day.