We're gearing up for the release of the third Webrid Chronicles novel, RED SPAWN DELIVERY, in 2017. The style of these books has been described as a cross between 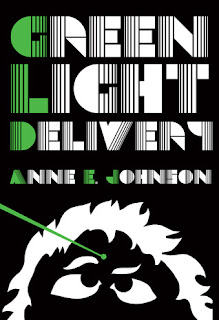 In anticipation, it seemed appropriate to acquaint (or re-acquaint) readers with the ridiculous but lovable mess that is Ganpril Webrid, carter of the city of Bargival on the planet Bexilla in the Raralt Planetary Circle. And so, let us start at the beginning...


Ganpril Webrid, carter for the Bargival district, handed a clod of jamboro cake to the blue-skinned businessman.
He took a dendiac note in payment. “You stayin’ here?” Webrid asked, “or can I bring my cart into your space?”
Obviously pretending that he hadn’t heard, the fellow closed his window and sucked the cake down whole through a slimy blue mouth.
Webrid hated these commuter types. Somehow, they never learned the basic courtesies of urban interaction. And they were always in Webrid’s way. So he tried again, louder this time. “Can I use your space, mate?” He enunciated clearly. “How long you stayin’?”
“Bivisher! Braaap!” came the reply, the first word being an expletive, the second a burp.
“Fine. I’ll go somewhere else.” Webrid knew when he’d been licked. But he couldn’t just keep rolling along. He needed to get off the street for a while, after several hours of selling cakes to commuters, pushing his cart through the hotafternoon smog.
As he thought about how tired he was, Webrid realized that someone was standing next to him. “Yeah? I got cakes today, friend,” was his automatic response. Then he turned his head and focused his eyes.
This guy did not want a jamboro cake; he could tell that much for sure. For one thing, this “guy” didn’t appear to be biologically based. Webrid could see the wires at its joints. A great metal head lowered itself on a slender tube of a neck. A brace of digital cameras absorbed the features of Webrid’s face, which made him squirm.
“Like what you see, sailor?” he joked, but only to hide his fear. This wasn’t a Vox police robot. Not one like he’d ever seen, and he’d seen them all, what with parking tickets and contraband searches every few days. The Vox, always watching and listening, seemed to be after him constantly for one thing or another.
The robot’s head came closer to his face. Webrid pulled back. Maybe it was a cop bot after all. “I ain’t parked wrong. I’m on the move, in search of a legal space, officer.”
The robot responded with a mechanical buzz and a series of clicks. A door retracted into its central chamber, revealing a speaker. Somebody—somebody biological—spoke. “Ganpril Webrid, Second-State Licensed Carter,” it announced.
That voice! Icy snakes of déjà vu scuttled up Webrid’s spine. Clear as the bot hovering before him, he pictured the squalid back alley where he used to play with his cousins when he was a kid. Webrid huffed and shook his head, chasing away the random vision.
“Ganpril Webrid,” the voice repeated. “You have been called.”
“Eh?” Webrid had just spoken this syllable when a delicate feeler came flying out of the robot’s head and wiped across his forehead. It stung. “Hey, now, what’s the idea?”
But the thing was gone. Upward. Out of sight.
Webrid felt a headache coming on, and a strange green light pattern was starting to flicker in one eye. The light coalesced into a shape. It was not a very familiar shape, but after a moment of painful concentration, Webrid thought he recognized it. A tree? There weren’t any trees in Bargival, or on the entire planet of Bexilla. Webrid had only seen trees in pictures at school years ago. But now there was one floating in front of him, made of a green cloud. Then its particles dispersed, and there was nothing to see but the comforting grunge of the Bargival streets.


Webrid decided he needed a drink.

Like Webrid so far? You can buy Green Light Delivery  directly from the publisher, on Amazon, on Barnes & Noble, and at other online retailers.