Webrid is excited about the 2017 release of a third book about him. (Who am I kidding? Webrid couldn't care less.) RED SPAWN DELIVERY will be available in a few months. For 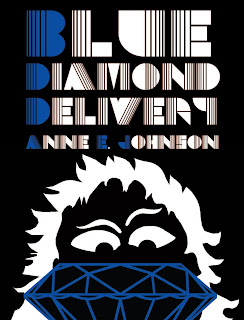 now, enjoy an excerpt from the second book in the Webrid Chronicles series...

“What the…?” He landed with a painful crunch, his wide shoulder wiping out his shelf of commemorative Valestin Hundred-Proof bottles (“Collect all twelve!”).

“Oof!” He pulled a shard of broken glass from his matted fur. That’s when he noticed he was naked.
“I guess it wasn’t a bar fight,” he slurred, as surprised as his muzzy mind would allow. At least he was at home. But something was seriously wrong. Looking around, he saw that most of his meager belongings were capsized or shifted. “Damn. How much did I drink?”

Webrid figured that, since he was on the floor anyway, he could think better if he stretched out on his back. That’s when he noticed the naked Entra lady suction-cupped to the ceiling. “Drarra, honey? Is that you? What you doin’ up there?”

With a resounding pop! pop! Webrid’s favorite paid companion loosened her head from the metal ceiling plates and bent backward to face the floor. “Oh. You still alive?” She didn’t sound thrilled. “What the hell happened?”

Webrid tried to do the gentlemanly thing and look at her face while he spoke to her. He wasn’t having much luck, so he closed his eyes. “Were we attacked by Blennf initiates, or what?”

“Nice one, Web. Mocking people of faith. Very classy.” Her sigh seemed rooted in her lower guts, in that way Webrid had heard from so many whores in his time.

“Seriously, though, what went on here?” he asked again.

Drarra pointed across the room. “I went flying off the bed, same as you. Only I’m lighter and stickier, so I grabbed the ceiling. Help me down,” she ordered, pushing a long, flexible limb toward him.

Webrid stood up in stages, fighting through aches in his hip and shoulder. “Grab hold, babe.” He reached up to get a firm grip on her appendage. “Here we go.” With gentle yanks, he unstuck her, cup by cup, pop! pop! pop!, until she was draped over his arms. “Flew off the bed, huh?” Webrid racked the one dusty corner of his brain that seemed to be working. “You’d think I’d remember sex that good.”

“Oh, please. What sex? You couldn’t manage anything but passing out when we got home last night.”

Webrid was hurt. “You gonna tell me how come we flew off the bed, or do I gotta read it in the paper?”

Webrid picked some wax out of his ear. “You say quake?”

Webrid rubbed his bruised shoulder. “Quake. Weird. And listen to that.”

“Outside.” Webrid was used to the sounds of downtown Bargival. He loved the wailing sirens and the vendors shouting at the honking commuters. The revving of engines was like a lullaby to him. But this morning sounded different. A whole new level of chaos.The screeching machinery sounded a lot bigger than usual, some of it hovering in the air. And more people were screaming louder. He’d have looked out the window of his tiny apartment had one. “Sounds crazy out there.” He let Drarra drip onto the bed and started searching for his pants.

“Never been a quake my whole life. And then, boom, there’s a quake? What’s that about?”

“How do I know? Something makes the rocks in the ground shift.”

Webrid, bending over painfully to look under a haphazard sculpture of piled-up furniture, turned his aching neck. “Why would the rocks in the ground shift?”

“What am I, ascientist now? It shakes, is all I know. Just look around you. This mess isyour scientific proof.” Drarra slid off the bed. “I’m hittin’ the Ladies’. Don’t bother me in there.”

Webrid dragged his gaze around his four dingy walls. “Too bad about my building.”

“What about it?” Drarra called from the bathroom. “It’s still standing.”

“Yeah. That’s my point. This lousy building stays upright, but I lose my Val-Hundred bottle collection. Where’s the justice, man?”

“Ha! You drink enough, you’ll have a whole new collection in half a moon.”

Webrid shook his head and pulled a glass shard from between two calloused toes. No point trying to explain to her that those were commemorative bottles. He’d have to deal with black market types to replace that set. Those Akardian salesmen made him cringe, skins covered in floppy lobes and tongues dripping with sweet lies.
Webrid sighed. A quake. Whoever heard of a quake in Bargival?

Want more Webrid? Buy BLUE DIAMOND DELIVERY directly from the publisher, on Amazon, on Barnes & Noble, and at other online retailers.