When Fiction Is Reality: Kevin Hopson on Loss, #Writing, and DELIVERING JACOB

Please welcome my fellow MuseItUp author, Kevin Hopson, who wrote his new novelette, Delivering Jacob, on a painfully personal topic. I invited Kevin to talk about the transfer of real life into fiction.

When Fiction is Reality
By Kevin Hopson 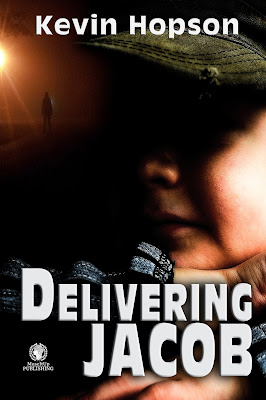 If you’re a fiction writer, you know that writing often portrays some aspects of our real life. Whether these depictions are in the form of names, character traits, settings, themes or whatever, they all come from a universal comfort in finding something we can relate to. As a result, we can’t help but include reality in fiction. However, what happens when an event, especially a devastating one, has impacted your life so much that it inspires you to write a story about it?

My cross-genre novelette, Delivering Jacob, is a perfect example of this. It deals with the loss of a child, which is something I experienced back in August 2010 when my son, Aydin, was stillborn at 36 weeks. Numb and in shock, I couldn’t imagine ever writing again, yet it crept back into my life only a few months later as I attempted to grieve and cope with the loss. My writing wasn’t the same, though. It turned more laborious, and the quality I had come to expect with my work was lacking. While writing provided a means of release for me, I had to come to terms with the loss before taking it seriously again.

It took nearly eighteen months for this to occur. After the birth of my second son, Skyler, I was motivated to pick up where I left off. That was three-and-a-half years ago, and I have published nearly a dozen stories/books since then. Even though I integrated some aspect of my loss into several of those works, none of them dealt directly with the death of a child, which is why I felt the need to write Delivering Jacob.

The idea hit me out of the blue, and everything fell into place almost immediately. In fact, the topic felt so natural to me that I managed to write the story in a few days. In addition to the theme, there are many ways I paid tribute to my experience. For example, the main character’s son, Ken, was named after my father who passed away in December 2011. I include other names of family members and even set the story in the Pacific Northwest, which is my favorite part of the country.

I’ve been told that Delivering Jacob is my best work to date. I’m not sure if I agree, but it’s definitely the most personal piece I’ve written, so maybe it hits the reader in a way that my other stories don’t. Regardless, it’s a diverse story that has a little bit of something for everyone … mystery, romance, crime, thrills, and even a hint of the supernatural. The subject matter is important to me, as well as the characters, which is why I have already written follow-up stories revolving around the life of Jacob.

Learn more about Kevin Hopson on his blog.

Purchase Delivering Jacob as well as Kevin Hopson's other books on Amazon.