I'm honored to join in celebrating ten years of existence for The Future Fire, an e-zine focusing on near-future feminist and queer science fiction with a political edge. Djibril al-Ayad is its editor and co-founder, and she joins me today to talk about her passion for this project. TFF is currently running an Indigogo campaign to help pay for an anniversary anthology. 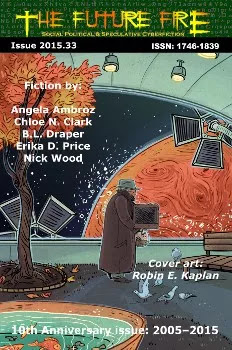 When three friends (in Switzerland, California and Scotland) and I launched The Future Fire in 2005, we may have had different ideas about what it represented (nihilistic postmodern American literature; classic cyberpunk and golden scifi; new wave political angst; samizdat and Borgesian horror) but we all agreed that we wanted an independent zine that was separate from conventional publishing, that neither made nor spent money, didn’t take advertising or sell copies. In fact we were very naïve, both in a relatively benign sense of not knowing the market and its limits, and also in the deplorable sense of thinking we were doing something new when in fact a hundred people were trying to do the same thing. But we had fun along the way, learned some hard lessons and some healthy ones, and although I’m the only one of the original four still standing, a lot of our original ideas are still strong (and nine fabulous co-editors are contributing new vision and inspiration).

After a few years of maturing and evolving, TFF arrived at a fairly stable and discrete mission, which is to publish overtly social-political speculative fiction. We’re not interested in stories that hit the reader over the head with a partisan message, but we are keen to see fiction that recognises the human and societal changes that take place in a science fictional future (or mythical past) are more interesting and challenging than technology, magic or monsters. And we are interested in hearing stories from, about and for diverse and underrepresented viewpoints: feminist, queer, postcolonial and disability themed speculative fiction alongside eco-sf, cyberpunk and low-fantasy. 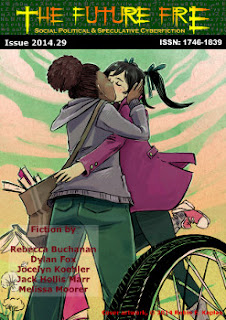 We’re feeling pretty pleased with TFF at the moment: we published three well-received print anthologies in the last three years (Outlaw Bodies, We See a Different Frontier and most recently Accessing the Future). All received positive reviews, and have individually been assigned to students in several college courses. Over a dozen of our recent stories have been shortlisted for awards or reprinted in “best of” anthologies, and we have authors submitting work who make me swoon! And all this without paying anything like a professional rate for fiction. We must be doing something people want to read.

So while we don’t feel we need to change the model too much, there are a few things we’d like to do better: chief among them is we’d like to be able to pay our authors a better rate—and perhaps even more importantly, the wonderful artists who illustrate the stories we publish. We have a call open now for our latest anthology, Fae Visions of the Mediterranean, collecting stories and poems of horror, monsters and piracy from North Africa, the Near East and Southern Europe. We’re also putting together an anthology celebrating a decade of publishing, collecting a few representative stories from the last ten years plus a bunch of new material into a print volume. To pay a fair rate for all of these will cost money, so we’re also running a fundraiser at igg.me/at/tffx, where anyone who likes what we’re trying to do can preorder a copy of the TFF-X anthology or our other books, or pick up one of our perks such as story critique, custom illustration or knitted undead doll in your likeness! The fundraiser runs until the end of August.

If you have any ideas for supporting the campaign, spreading the word, or just thoughts or good wishes for the future of TFF, please do get in touch. We’d love to hear from you!

The Future Fire's 10th anniversary anthology fundraiser runs through the end of August, 2015.