Always a pleasure to welcome Milo James Fowler to Jester Harley's Manuscript Page. I admire anyone who writes as well and as consistently as he does, who shows such determination to get his work out there, and -- most important -- who isn't afraid to put some funny in his science fiction. I'll let him tell you about his latest project: 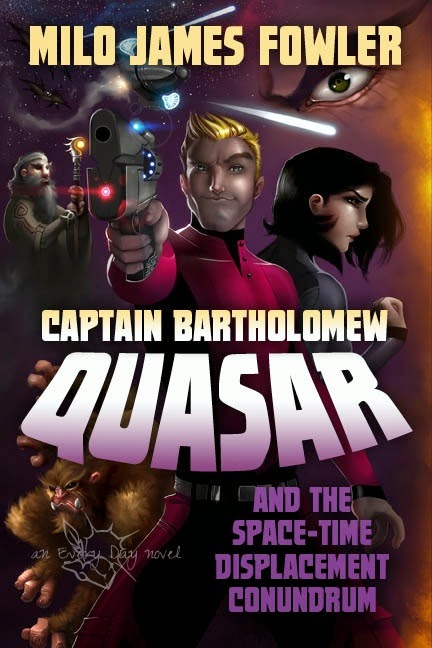 For me, writing fiction is all about the characters. And when I create a protagonist I enjoy, I can't help but write more stories for him.

When I came up with Captain Bartholomew Quasar back in the spring of 2010, I was going for a mash-up between William Shatner's James T. Kirk and Dudley Do-Right from the Rocky and Bullwinkle Show (but in Quasar's case, things seldom ever go right). He's one of those classic pulp heroes with a heart of gold whose narcissistic tendencies often land him in hot water. The captain hasn't changed a whole lot in the dozen other tales I've written, but his relationship with Hank and the other characters is deepening with every story, as Quasar realizes he needs them in order to continue being as awesome as (he thinks) he is.

I don't write hard science fiction with a whole lot of actual science in it. I focus on the characters, and everything else I just make up—or I rely on osmosis to filter enough jargon into my brain from all the SciFi that I've read. I do my best to aim for universal themes and relatable characters, and I try to shoot for a high entertainment value that transcends any barriers to enjoying these space opera tales.

I hope readers can laugh at Bartholomew Quasar and root for him at the same time. He's ridiculous, but there's something about his fallible nature that most of us can relate to on some level.

Blurb:
Captain Quasar is out of time.
Pursued by vengeful Goobalob toll collectors, savage Arachnoid bounty hunters, and formidable Amazonians, Captain Bartholomew Quasar must do whatever he can to keep the crew of the Effervescent Magnitude out of harm's way. All in a day's work—except time is not on his side.
Torn from the present to relive his past, he vows to keep mistakes from occurring the second time around. But is he doomed to repeat the past? Or can he erase his regrets?
Villains will be vanquished. Lives will be lost. Bonds will be betrayed. Heroes will be heroic.
Join the crew of the Effervescent Magnitude for a hilarious time-travel space adventure the likes of which you've never seen.


*   *   *
You can learn more about Milo James Fowler on his website.
Read more about the series and subscribe to it here and read the teaser/prologue right here.
Posted by Anne E. Johnson at 8:00 AM