Tracy S. Morris and the most haunted hotel in America

A spooky story with a fascinating historical background: that's what you'll find in Bride of Tranquility, a new novel by Tracy S. Morris. She stopped by to give us the scoop.

Right in the wedding and honeymoon Mecca of America, there sits an unlikely attraction – the most haunted 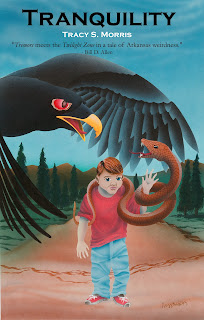 hotel in America.  This hotel was the inspiration behind the haunted hotel in my novel, Bride of Tranquility.

The Crescent Hotel in Eureka Springs has been a Victorian Resort and health spa, a private school, a cancer hospital and a women’s college. Once visitors step within the hotel’s walls, they may encounter ghosts from any one of these periods of occupation.

In the early 1880's when the hotel was constructed, visitors came to the Ozark Mountains to ‘take the waters,’ as a form of early alternative healing. The hotel earned its first ghost during construction, when an employee fell from the roof and landed in the second floor area. The place where he landed, now room 218, is said to be the most haunted room in the building.

Though the hotel was initially successful, when the healing waters fad passed, tourism dried up.  Eventually the building became a private school, then a women’s college. Sometime during this span, legend says that a young girl threw herself from one of the hotel’s balconies after being rejected by a beau.

These ghosts were only an encore to the tale of gothic intrigue that was to follow.

In 1937, a man named Norman Baker turned the building into a cancer hospital. Baker was a charismatic inventor and radio personality. He drove a lavender sports car, dressed entirely in purple, and even had the walls of his hospital painted with the color because he believed it had healing properties. On his show, he promised to cure cancer without resorting to invasive procedures.

Records show that no one died due to Baker's treatments. However, local rumors paint him as a quack at best, and a mad scientist at worst.

When the current hotel opened, guests and staff alike reported sighting ghosts throughout the building, including the aforementioned girl jumping from the balcony, Dr. Baker and his nurses wandering the halls, and even the cancer patients themselves.

No one is quite sure why the hotel has so many ghosts. Perhaps it’s the mineral water that runs beneath the hotel. Or maybe it’s a form of tourism snake oil peddled by the hotel’s owners to attract guests. But whatever you believe, it makes for a good story.

Learn more about Tracy S. Morris on her website.
Purchase Bride of Tranquility on Amazon.
Posted by Anne E. Johnson at 7:00 AM