One of the joys and challenges of writing fiction with a historical backdrop is deciding how close to stick to actual history. Should you invent other realistic plot elements as central points in the story? Should you step away from reality and let in a touch of magic? For her novel Angel Heart, Marie Laval found the perfect opportunity for the latter choice. 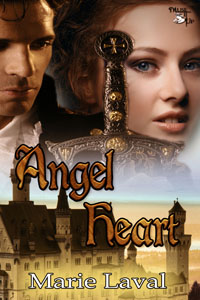 I'm not the first author, and I certainly won't be the last, to be fascinated by the history of the Knights Templar and to find inspiration in their troubled, secretive and dramatic past which to this day has been the source of so many tales and myths.

In ANGEL HEART my heroin Marie-Ange must recover a sacred relic hidden by the Knights Templar - the Cross of Life – which is rumored to give eternal life. With the help of cuirassier captain Hugo Saintclair, she unravels an old family mystery linked to the legendary Count Saint Germain, a man reputed immortal, and returns the cross to its original hiding place in the crypt of the chateau of Arginy in Saône-et-Loire, to the North of Lyon, my home town. Whereas the Cross of Life is my invention, I have interwoven myths and historical facts about the Knights Templar and places linked to their Order.

The Knights Templar, also know as the Poor Fellow-soldiers of Christ and of the Temple of Solomon, was a monastic order founded in 1118 to protect pilgrims to the Holy Land, defend the Saint-Sepulcher and fight in the Crusades. The Order grew rapidly in power and wealth and the Knights Templar, in their distinctive white mantles with a red cross, were among the most skilled fighting units of the Crusades. They managed a large economic infrastructure throughout Christendom, acquired vast estates, became the French King’s bankers and built fortifications across Europe and the .

The Templars' existence was tied closely to the Crusades and when the was lost, support for the Order faded, and rumours that they indulged in heresy and devil-worshiping grew rife. In 1307, as he found himself deeply indebted to the Order, Philipe IV of France – also known as Philipe le Bel – decided to have most of their members in arrested, tortured into giving false confessions, and then executed. Under pressure from the French King, Pope Clement V disbanded the Order in 1312. The abrupt disappearance of the Order gave rise to speculation and legends.

One of them stems from the curse issued by the last Great Master, Jacques de Molay, against the Pope and the French King. As he was being burned at the stake, he predicted that the Pope would die within forty days, foretold the French King’s imminent death and cursed all his descendents for the next thirteen generations. The Pope died three weeks later, Philippe le Bel eight months later. Some claim that the execution of King Louis XVI in 1792 put an end to the Templar malediction on the royal family, since Louis was the 13th generation of the Capet line.

King Philipe’s actions against the Templars did not make him a wealthy man since only a fraction of the Templar rumoured vast treasure was ever recovered. Perhaps it was because, forewarned of their imminent demise, the Templar Knights arranged for their treasure to be shipped away - to Scotland or Cyprus - or transported to a secret location, like the chateau of Arginy in the Beaujolais or Gisors in Normandy.

In ANGEL HEART I chose to make the chateau of Arginy the treasure's hiding place. Arginy is a fascinating place. It was built on an ancient Roman salt mine in the 11th century, then extended in the 16th century. With its three towers and a dungeon, its moat and two draw bridges, it looks imposing and mysterious, even to this day. Its tallest tower is named the 'Tower of Eight Beatitudes' and had internal walls covered with alchemic symbols. Between the 13th and the 15th centuries the chateau was owned by members of the powerful Beaujeu family, the family of the man who was the 21st Grand Templar Master between 1273 to 1291, Guillaume de Beaujeu.

A few nights before his execution, Jacques de Molay, the last Grand Master, called his nephew Guichard de Beaujeu to his jail in for a final meeting. Nobody knows what they talked about but a few days after Molay's execution, Guichard asked King Philippe for the permission to remove the coffin of his ancestor Guillaume from the crypt in the to the chateau at Arginy. What was in that coffin? Beaujeu's remains only or the Templar treasure that Jacques de Molay had asked his nephew to keep safe?

So the legend was born...Ever since the 16th century, many treasure hunters tried their luck at Arginy, and every time there was a mortal accident or tales of 'diabolical' goings-on. People soon believed that the chateau was cursed. In the 1950s the chateau's then owner, Jacques de Rosemont, called in a team of occultists who decreed that the Templar treasure was indeed hidden in the crypt at Arginy, and was guarded by the ghosts of eleven Templar Knights.

The chateau is still privately owned to this day, but  nobody has been looking for the treasure for a while...

With such a history, it's no wonder that Arginy plays such an important part in ANGEL HEART. There are however other places that I absolutely loved to research, including the village of Malleval in the Pilat mountains South of Lyon, which was linked to sorcery, esoteric societies and bandits, and of course my home town of Lyon. But these will have to wait for another post!

A final word about the Knights Templar...The Knights Hospitaller – or Knights of Saint John – who were founded at around the same time as the Knights Templar to care for sick and injured pilgrims, still exist today. They are now a charitable organization based in .

*   *   *
Learn more about Marie Laval on her blog.
You can purchase Angel Heart directly from MuseItUp Publishing or on Amazon and AmazonUK.
Posted by Anne E. Johnson at 7:00 AM