Jennifer Allis Provost on the genesis of COPPER GIRL

As an author, finding out what you're actually writing can be quite an adventure and surprise. Jennifer Allis Provost shares with us the journey of discovery she took with her new novel, Copper Girl. 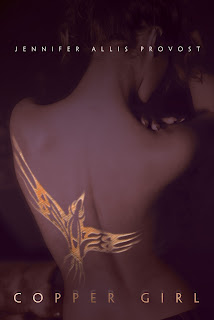 Thank you, Anne, for letting me stop by! I’m Jennifer Allis Provost, and I’m going to talk about the convoluted path I took writing my latest release, Copper Girl.

I began Copper Girl with the scrap of an idea gleaned from my boring job as a cubicle monkey. While this seed was germinating, a few other ideas fluttered forth, and before I knew it, I had the makings of a story: I was going to write a YA dystopia.

Or so I thought.

In this initial version, the main character, Sara Corbeau, lived in a world that used to be full of magic, but no one believed in it anymore. Then Sara started seeing a man in her dreams, who turned out to be an elf lord from the Otherworld. Sara even had a snarky best friend, who disbelieved in everything magical, and worried that Sara was losing her mind.

You see, an integral part of Sara’s journey revolves around her boring desk job. (I know, art imitating life at its finest) Most teens don’t have full-time office jobs, so that, along with the romance level in the book, pretty much knocked Copper Girl right out of the YA ballpark. Taking a cue from said romance level, I set out to rewrite it as a paranormal romance.

Or so I thought.

In this version, Sara and the dreamy elf lord, Micah, meet in their physical forms fairly early on, and establish a relationship. I also moved a good portion of the action to the Otherworld, and added some political drama. Since I had also added the Element-based magic system during this go-round, this is when Sara actually became a copper girl.

That version didn’t work either.

Before I started the third rewrite, I took some time to really think about the plot. So Sara worked at a lame office job, then an elf showed up in her dreams, and chaos ensued. That’s all well and good, but what was the chaos ensuing to? Then it hit me, the integral part that I was missing:

What the heck was the point of this story?

And that, dear reader, is exactly what Copper Girl had been missing. The characters were there, but the stakes weren’t high enough. I didn’t really understand what Sara wanted badly enough to defy her totalitarian government and begin using magic again. Then it hit me.

That totalitarian government had taken her brother away ten years ago, and she hadn’t seen him since.

Shortly after this revelation, Copper Girl went through its third and final major rewrite, and became a dystopian-flavored urban fantasy. Snarky best friend stayed, missing brother entered, and the rest of the story fell into place. The best part about this version was that it flowed. The words almost arranged themselves on the computer screen, and the plot never felt slow or stilted.

This was the story, just as it was meant to be. Finally, I’d thought right.

It took almost a year of rewrites, crumpled sticky notes, and anguished calls and emails to editors and critique partners before Copper Girl finally came together. But, you know what? In the end, it was all worth it.