Please welcome my guest, Barbara Burgess. She shares with me an educational background in the Middle Ages, although she went the more fantastical route for her new YA novel, The Magic Manuscript: The Nine Companions (second in the Magic Manuscript series), which places contemporary teens into the legendary period of King Arthur. Barbara discusses the inspiration for her series.

Thanks so much, Anne, for having me as a guest on your blog.

Today, I’d like to talk about the roles that the key female protagonists play in my latest YA fantasy novel. I thought to open with this quote from sixteen-year-old Malala Yousafzai’s inspiring words at the United Nations the other day.  Her words about helping young women around the world realize their own strength and potential deeply resonated with me. “We call upon our sisters around the world to be brave – to embrace the strength within themselves and realise their full potential.” 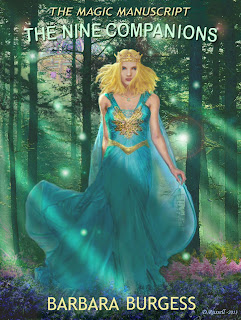 I specialized in medieval English literature at McGill University. My thesis advisor had been tutored by C. S. Lewis at Oxford University and introduced me to “Sir Gawain and the Green Knight” and other Arthurian legends. Years later, I decided to write my own version of the timeless Arthurian legend. My YA fantasy novel, The Magic Manuscript: Book One – Voyage to Eve Ilion, was first published by Piraeus Books in 2011. Two teens, Jennifer and Arthur, are thrown back in time after Jen finds a medieval magic manuscript in a cave in England. They meet the wizard Merlin in England around the year 500 AD. In my latest novel, however, The Magic Manuscript: The Nine Companions, I decided that Merlin should reappear in the twenty-first century as a beautiful Welsh woman in her mid-twenties—Bronwen—who has a key position at the UN. She becomes a mentor and guide to Jennifer Gael, the main heroine in the story. I wanted to present to teenage girls—and all readers—the ideal of a strong and influential female leader. When Jennifer, Lance and Arthur first meet her, Bronwen tells them:

“I’m the daughter of a prominent politician. My mother was a minister in the government. I grew up meeting cabinet ministers at the dinner table—a kind of modern-day court. At university, people became interested in my poetry and ideas, and I found myself in the public arena, championing idealistic causes. The UN has commissioned me to write a manifesto of peace … I need you three to stand as warriors against darkness. Jennifer, this is the age where women can be powerful leaders. That’s that why I returned as a woman, this time around.”

The theme of free-spirited young women reclaiming their right to independence certainly runs through this second book (which can be read without having read the first book). Jennifer and her boyfriend Arthur time travel again; this time, they land in the desert of ancient Sumeria in the year 3200 BC. The two youths are kidnapped by Faizi, a tyrannical leader. He tries to push Jennifer into an arranged marriage. They must escape Faizi, and as they flee through the desert, they are aided by other young companions who also want a life of freedom from oppression and tyranny. Throughout their journey, we sense the hidden, mysterious and beneficent power of Lady Eve. She is the goddess whom Jennifer met in her earlier time travels (described in book one) and who helped Jennifer develop her intuition, ability to understand all languages, and unfold hidden potentials and superpowers, such as the abilities to fly and prophesy.

The cover of The Magic Manuscript: The Nine Companions was done by artist David Russell, who has worked as a storyboard artist on movies such as “Star Wars: Return of the Jedi,” “The Lion, the Witch and the Wardrobe” and “The Voyage of the Dawn Treader,” to name but a few. I was honoured and delighted that he created such a splendid cover for The Nine Companions, in which he depicted Lady Eve, goddess of the island of Eve Ilion. Russell portrayed her just as I envisioned—a powerful young woman with great strength, determination, beauty, and grace.

You can read more about Barbara Burgess and the making of The Magic Manuscript: The Nine Companions at her website.

The Magic Manuscript: The Nine Companions can be purchased directly from the publisher, and on Amazon.