Plotter or pantser? It's the eternal writer's question. Justin Robinson, who is celebrating the launch of his very funny suspense novel, Mr Blank, shares his thoughts on how he learned to stop pantsing and love the outline. 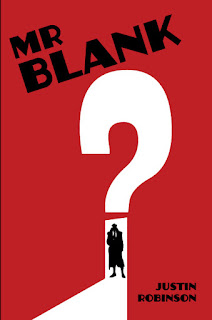 The Importance of Outlines

Back in August, I volunteered over at Marshall High for career day.  Long time readers will remember this as the site of the Afterschool Special “Two Loves for Jenny,” which somehow forgot to include a single character named Jenny.  I was over there because the college counselor inexplicably thought I could have some wisdom to offer high school kids beyond toothpaste making beer taste funny.  I found myself sitting in the lunch area with a little sign that said “Justin Robinson -- Writer” as about sixty teenagers wandered from table to table to chat with the various professionals (and me) scattered throughout.

I bumbled, stammered, and joked my way through the two hours, otherwise known as how I deal with every social situation.  The kids asked a variety of questions, but the one thing I kept returning to was the importance of The Outline.  I used to turn my nose up at the thought, not because it was a bad idea, but because it smacked of work, something that writing couldn’t be.  Accepting that not only is writing work, but is occasionally hard work, is one of the more important steps to doing this sort of thing as a living.  And come on, it’s not like construction workers throw up buildings off the top of their heads.  Someone makes an actual drawing beforehand sometimes.  Books are a lot like buildings, except that barely anyone pees in books.

I’m a compulsive outliner now.  My first novel, Subspace, was the only one I did without an outline, and I got away with it because it already existed as a novella.  When I sat down to write Mr. Blank, I wanted to avoid the issues of stalling out and rambling on that plagued me in the past.  This would require outlining.  I started out knowing I would need exactly 23 chapters (required if you’re writing anything about conspiracies), and went from there.  Each chapter was structured around a conflict between the narrator and some representative of the Information Underground.  Since chapter 12 would be the middle, it would serve the fulcrum of the book, where our hero would develop the hypothesis that carries him through the rest of the story.

There’s a tendency to want to follow an outline slavishly, and it stems from the same place as a reluctance to rewrite.  It’s the weird sense that the words came from on high and are binding contracts.  They’re not.  The outline is a tool, not a master.  Sometimes, either what I’ve outlined isn’t possible to write or sounded better in the outlining phase than it looks on the page.  When that happens, I look at both the outline and the book.  I try to figure out my reason for outlining it that way.  Was it a solid reason, or was it just because I lacked perspective on the book as a whole?  While writing, did I make some breakthrough on character or plot?  Am I missing out on a good moment, or did I outline something no sane person could ever communicate?

Outlines are important for the same reason you don’t wear white to a pie-eating contest.  Be prepared, and you won’t feel quite so silly while fishing raspberries out of your sinuses.

You can purchase Mr Blank from the publisher, or on Amazon and Barnes & Noble.

[Note: I moderate comments, so yours might not show up immediately.]