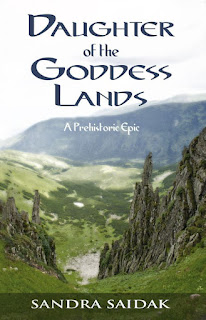 Oh, I do love a nice theme! Last week we enjoyed a discussion of dinosaurs and megafauna in middle-grade lit. This week we are fortunate to have Sandra Saidak, author of Daughter of the Goddess Lands and Shadow of the Horsemen, sharing secrets about how she writes prehistoric fiction.

The genre of prehistoric fiction, as most of us think of it today, began in 1980 with the publication of Jean Auel’s The Clan of the Cave Bear.  Before that, it was mainly a sub-genre of science fiction, involving time travel or the modern-day discovery of people (and usually dinosaurs) lost in time somewhere on earth.  Legendary pioneers like Jules Verne and H.G. Wells contributed some of prehistoric fiction’s earliest pieces.
In the nineteenth century, archeology was coming into its own as a science, and the acceptance of Darwin’s theory of evolution made it possible for people to view newly discovered fossils and artifacts in an entirely new light.  We had ancestors unlike anything described in the bible!  Who were they?  How did they live?  And perhaps most importantly, what could they tell us about ourselves?  Most of the early writers incorporated the new discoveries into their fiction—a trend which continues to this day.

I love prehistoric fiction—both the writing and the reading of it.  The farther back you go in time, the less is known—a perfect playground for the imagination.  Artifacts abound, but for many of them, there is no consensus among the experts as to what they mean.  This allows anyone with enough creativity to build an entire world from a few bones, tools, and burial sites.  It also allows an author to do a lot of research in a few hours.  If you want to write a novel set in Tudor England (and clearly, a lot of people do these days!) you’ll have to read hundreds of pages of legal documents and family histories, livened up by the sometimes juicier diaries, letters and broadsheets.   Tudor England was an extremely well-recorded time in our history, and if you want to do justice to the reality of it in your fiction, you need to read it all. 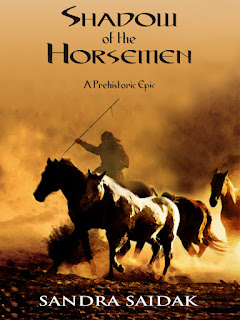 Not so with prehistoric fiction.  I sometimes find the most useful research to be just staring at a map of the world for a few hours.  Inevitably, I’ll fixate on a section and ask myself: “How many transatlantic crossings could have happened before Columbus?  Who crossed?  Why and how?” or  “If there was no land bridge from Asia to Australia when the first humans journeyed there, what could possibly have made them risk crossing open water if they didn’t even know there was land on the other side?”  Or, even more tantalizing: “Did they somehow know there was land?  How?”  And I’ve asked the same about Japan.

Then, once the story has me firmly in its grip, I go to my bookshelf or the internet, and look for what information is there.  Sometimes it’s not much more than maps of how those places looked at the times I’m interested.  Sometimes it’s conflicting theories, or a news story about a strange artifact that shouldn’t be there.

And for great prehistoric fiction, sometimes that’s all it takes.

*   *   *
For more information about Sandra Saidak, visit her website.

You can purchase her books on Amazon.
Posted by Anne E. Johnson at 7:30 AM