Lucinda E. Clarke on Writing an African Adventure as Her Own Boss

Our well-traveled guest talks about how retirement led to the freedom to create a character close to her heart. Please welcome Lucinda E. Clarke, author of Amie: An African Adventure.

Stories of My Own Choosing
by Lucinda E. Clarke 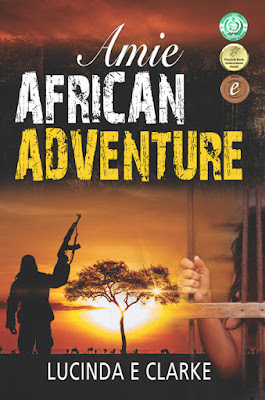 After thirty plus years writing for other people who knew what they wanted, and my eager compliance (despite the propaganda) which allowed me to bank the cheque and support two children, one husband and a St Bernard with a voracious appetite; when I retired I became my own boss. Finally I could write what I wanted.

It was time to drag her out of her comfort zone and send her to Africa. I gave her a while to settle in, make friends and discover the beauty and majesty of the Dark Continent.

Then the first crisis arises as she’s coerced into filming, first propaganda for the government, and then the results of atrocities that signal the coming civil war. When the hostilities break out in the capital she gets caught up in the fighting and lands in prison. From then on it’s a struggle to survive.

I’ve drawn on my extensive experience of Africa in all three of the Amie novels. I was so fortunate to go where few tourists or residents ever go, from witchdoctor’s huts to chief’s kraals, to meeting royalty, presidents and peasants. I was often the only European for miles around as I worked deep rural with my filming crew.

As Amie lurches from one crisis to another throughout the series she learns to toughen up. All the rules, morals and mores she learned as a child do not apply to Africa. She sees a totally different mindset, a new set of guidelines she’d never imagined. She makes friends, is betrayed by others, loses everything and begins a new life. She is forced to work for those who will kill her if she does not obey. She changes from meek housewife to trained killer, someone who no longer officially exists, facing dangers she would never have envisaged.

Yet despite everything, the country and the peoples take a hold on her and won’t let go. She’s in love with her adopted continent, mentally she’s trapped and realises that ‘while you may leave Africa, Africa will never leave you.’

My biggest inspiration for writing the series is to share the truth about the real Africa, to share with people the raw, savage reality besides the warm, friendly people and open the readers’ eyes to a very different world.

Learn more about Lucinda E. Clarke on her website.
Sign up for her newsletter here.
You can purchase Amie: An African Adventure on Amazon.