Planet of the Eggs #Comicbook Series Publishes a New Issue!

Coolness alert! My guests today are the writer and illustrator team who create Planet of the Eggs, a dinosaur-themed comic book series. Peggy Bechko and Charlene Sorensen stopped by to discuss their process.

*   *   *
Welcome to Eggland!
by Peggy Bechko and Charlene Sorensen 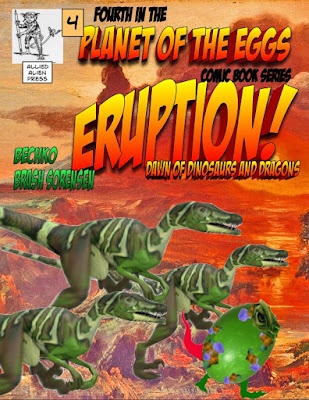 Friends for many years, Peggy was ready to embark on a whole new venture - comics!

And Charlene was ready to stretch her creative wings.

Together they created the new Planet Of The Eggs Comic Book series. The first in this 'eggciting' adventure across time, space and who-knows-what, Cracked Open, introduced the Six Eggs of Legend and was followed by the second Grimoire: Book of spells, the third, Mummified Egg and the fourth Eruption (the first of a two part adventure).  There are many adventures yet left to tell.

The writing/illustrating team, living in the foothills of the high mountains just five minutes apart, is geared up, creating the second in the two part adventure Eruption and Saving Dot. and have reached a point where one can read the other's mind. Even artistic disagreements are arrived at simultaneously. They spend two to three days a week together, creating jointly and time apart creating illustrations, working on their newsletter and pondering what might come next for the well-armed eggs.

For Peggy, an author who’d always created alone previously, what happens when things change? When the career takes yet another turn (most careers have many of those turns) and life hands this writer a new direction and simultaneously a writing partner?

With a great writing partner, things pop and sizzle as never before. We end each other’s sentences and marvel at one another’s ideas. Effortless. Satisfying. Fun! It gives us chills! 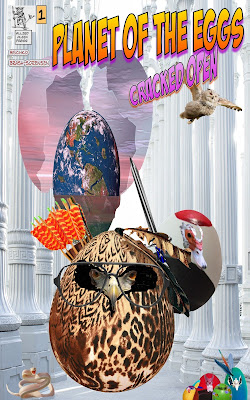 And I guess one would call what we do, creating more than simply writing. We created our own project, a new comic series called Planet Of The Eggs. We learned new software, created story lines, wrote scripts, designed characters from scratch and pulled the whole thing together in an ‘indy’ published comic es, not to mention creating designs for our Café Press Planet Of The Eggs Shop. It was a learning curve the size of Mt. Everest, but it was a great climb. We work side-by-side two days a week and separately the rest of the time sending ideas, created comic characters and other bits and pieces back and forth via email. We’ve learned much about getting our work out there for people to enjoy. It’s a wonder we actually sleep. Actually it’s not clear that Charlene does.

Peggy and Charlene envision a long life for the Six Eggs of Legend as they move between the worlds, superpowers evolving, and fight the forces of evil to save Eggland. And a long and happy partnership in the creation.

*   *   *
Learn more about Peggy, Charlene, and Planet of the Eggs on the official website or subscribe to their newsletter.