Today's guest is Maggie Hogarth, an experienced author (as MCA Hogarth) who recently jumped into the deep end of the kidlit pool, self-publishing her first works for children. She shares her very personal story:

"I'd like to write an adventure for Vinny the armadillo," I say to Daughter of her new plush toy. We are in the car, driving home from her grandmother's house. "What should I write?"
Daughter, who is six, says with enthusiasm, "He can go to the sea! And meet a shark! And the shark can eat him!"
"But if a shark eats him, there won't be any more stories!" I say. "Besides, I'd like him to learn something in these books. How not to be eaten by sharks isn't a lesson most children need to learn." 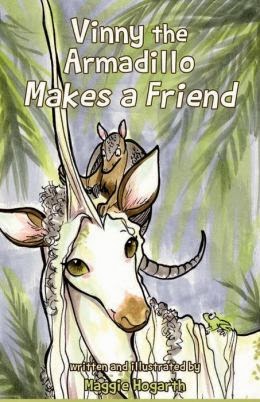 "How about Vinny climbs a telephone pole and can't get down!"
"All right," I say, trying to work with this. "Then what happens?"
"And then he falls down and dies!" she finishes gleefully.
"That's a horrible ending!" I say, and she's already giggling, so I start laughing too. "Besides, what's the message there?"
"You shouldn't climb up places you can't climb down from."
I can't disagree with this, but I find myself explaining the concept of reader expectations, and what will happen to Mommy if she writes a book for first-graders that involves the hospitalization of armadillos after all the appalled parents find Mommy's email address.

***
Later, I am working on art for Vinny the Armadillo Makes a Friend when she finds me at the kitchen table. I decide to apply for her opinion. "Do you think I should put the unicorn on the cover, or would that spoil the surprise?"
"I think it would spoil the surprise," Daughter says. "Besides, if you put a unicorn on the cover, boys won't read it."
"What?" I say, startled into looking up from my sketchbook.
"Boys don't like unicorns," says Daughter firmly. "They think they're too girly."
"Even my unicorns?" I say. "My unicorns live in swamps! They have gnarled old horns like the roots of mangrove trees! Moss grows in their manes!"
"Boys won't buy it. Sorry, Mommy," she tells me, and pats me on the shoulder sympathetically before skipping off to play. Of all the things I anticipated when deciding to write a chapter book, the one thing I didn't was how much fun my daughter would have walking through the process with me. I normally write for adults—science fiction and fantasy novels and business nonfiction—a process that she knows only as "Mommy stands at a computer and says she's working." For the first time, I was able to expose the inner workings of Mommy's job to her in a way that allowed her to participate. I was surprised at her enthusiasm during every stage of the book's creation, even for the strange minutia, like checking the galleys and making decisions about margin size and font choice. When I finally handed her the Real Live Book, she was as excited as if we'd performed magic. From the intangible discussion we'd had in the car about her new stuffed animal, we'd created a physical object her friends could now buy from the bookstore.

Self-publishing a chapter book was probably not the wisest financial decision I've ever made. Selling children's fiction without traditional publishing's conduits into school and library systems is (at this point) a near non-starter. But getting to hear my daughter's ideas on story, art, and marketing, and seeing the excitement in her eyes when she paged through the final copy, was worth it. Vinny the Armadillo, and my Laundry Dragons, might never make us more than a little grocery money, but we'll both be able to say, one day, "We did that together."

Purchase Vinny the Armadillo and the Laundry Dragons books on Amazon and Barnes & Noble.
Posted by Anne E. Johnson at 8:00 AM