Today's guest, Anola Pickett, has made an essential discovery: Not only does history not need to be boring to learn, but it can be an absolute joy to teach, especially when presented as fiction for kids. She shares the journey of discovery she undertook to research and write her novel, Whisper Island. 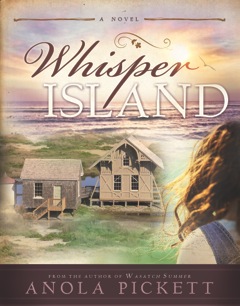 No one is more surprised than I am that I now write historical fiction for young readers. When I was in school, I found history and geography classes dry and boring, based on memorization of dates and places. Fortunately, I audited a college course in Elizabethan England because it tied in with my English major. The professor was a witty, engrossing teacher who led her class into the lives of the English during that period. It was fascinating to study history through people rather than the pages of a text. To see them and hear their language brought their story to life for me.

I’ve tried to do the same in my historical novels. By exploring a piece of American history through the eyes and ears of my characters, I hope I’ve brought a time and place to life for young readers.

My research has taken me to Cache Valley in Utah, the Blackfoot reservation in Montana, and the barrier islands of North Carolina. I’ve photographed those places and visited the local museums. I’ve read books, newspaper and diaries to gain a sense of place and culture. Most importantly, I’ve listened to many people happy to share their family and community stories. Each experience has given me a real and specific sense of history.

The journey to my new novel, WHISPER ISLAND, began several years ago when I visited the Outer Banks and heard a park ranger speak about notable shipwreck rescues along the North Carolina coast. The details of a 1913 story caught my fancy. The captain’s wife was the first to be conveyed off the ship. All the way to shore, she wailed about the loss of her clothes and finery, completely overlooking the fact that men were risking their lives to save hers. The captain was the last off the ship, and he carried his St. Bernard in his arms. He later gave the dog to the surfmen who rescued his crew and family.

I let that little story noodle about in my imagination while I tried to build a plot around it. A girl character named Primmy stepped into my imagination one day, and I decided to make her the main character. But one character and an interesting historical fact do not make a novel. I needed more.

Another trip or two to the Outer Banks, especially to the Chicamacomico Life-Saving Historic Site, led me to the important, but mostly forgotten, work of the U.S. Life-Saving Service. A group of courageous, determined men, they went to the aid of ships that wrecked on the shoals off their coast. They went out no matter the weather or time of day. Theirs was truly a 24/7 job.

Language is an important window into a time and place. While researching life on the Outer Banks in the early 1900’s, I came across a book titled Hoi Tide, which explored island language. Some words intrigued me, so I used them to introduce my chapters. If you read the book, you’ll learn the meaning of meehonkey and mommucked, for example.

Now I had more information about a group of brave men. I knew more about island language. But I still had no real plot, so I continued to dig into the USLSSS history. When I learned that females weren’t allowed to serve as Life-Savers, I’d found a problem for Primmy to solve. She’s only twelve, but Primmy’s spunky and determined to prove her mettle. Read WHISPER ISLAND to find out if she succeeds!