This week's guest talks about fiction-writing from a different perspective: as an editor. Alex Shvartsman, whose own collection of published science fiction stories would stretch from here to Cleveland if laid end to end, has edited an anthology called Unidentified Funny Objects. He shares with us an insider's view about the difficult task of picking stories from the pile of submissions. 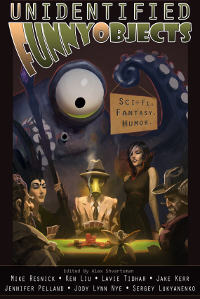 This was the mantra of my associate editors and I as we read submissions for Unidentified Funny Objects last year. My stated goal was to collect a wide assortment of humorous stories and to feature a variety of styles and sub-genres that would offer something for every palate. But how to make certain that my personal tastes don’t skew the book toward the kind of humor *I* like at the expense of what other readers might enjoy? In order to build a healthy, balanced collection, I developed a slush system that’s quite different from most publications.

Each story we received was read by the first reader (in most cases it was me, only about 20% of the stories were seen by one of the other editors first). The first reader’s job was to look for stories that *might* be a good fit even if they weren’t that reader’s personal favorite. This culled well over 80% of the submissions and left us with a handful of very strong contenders.

Each story that made it past the first reader was stripped of any personal information and sent out to 5+ associate editors for evaluation. Anonymity was meant to help the editors judge the story solely on its merit – they didn’t know whether they were reading a submission by a Nebula winner or by a previously unpublished author.

Each editor offered a Yes, No, or Maybe vote with some comments. Based on those votes and feedback I either released the story back to the author, held it until the end of the reading period, or (in a few rare cases) bought it immediately because I knew I had to have it for the book.

I ended up buying 29 stories out of over 900 submissions. Do you know how many of those 29 received a unanimous vote from the associate readers? None. Not a single one. Because--say it with me--humor is subjective.

I don’t truly expect any one reader to enjoy every single story collected in this book. However, I strongly believe that almost anyone will find multiple stories they can love. Both readers and critics have been very kind to the volume so far, sharing this sentiment.

But don’t take their word for it – you can read a number of additional bonus stories posted for free at www.ufopub.com -- and if you are a Twitter user, may I suggest that you begin with this one: http://www.ufopub.com/twitter
Unidentified Funny Objects is available as trade paperback and eBook at Amazon, B&N, and Kobo, as well as directly from UFO Publishing:
http://www.ufopub.com/buy-our-books/