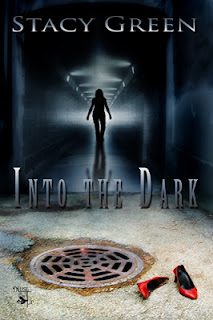 Stacy Green is a writer fascinated by the workings of the criminal mind. She shares with us how she used elements of true crime and the dark truths of the city of Las Vegas to add layers of meaning and texture to her debut novel, Into the Dark.

When I was five years old, a group of teenagers were drag racing down our road and ran into a light pole, plunging our house into darkness. I remember getting out of the bath just as everything went pitch black. I lost all senses. I couldn’t remember where I was or what I was doing. For a few brief seconds, I was so terrified I couldn’t move.

I’m no longer afraid of the dark, but small, unlit rooms or places strike an immense fear in me. Maybe that’s why I was so drawn to the Las Vegas Tunnels.

My debut novel, Into the Dark, features the homeless living in the storm drains beneath Las Vegas. Described as by journalists as “eerily quiet,” “pitch black,” and “heartbreaking,” the Las Vegas tunnels were a shock to this sheltered Midwestern girl.

At any given time, more than 200 homeless take shelter from the heat in the drains, subjecting themselves to flash floods, filth, and danger. Many of them are addicts, some are criminals hiding from the police. All of them need a helping hand.

The initial drafts of Into the Dark were about an embattled heroine falling for the handsome, all-star SWAT officer. Fun maybe, but without any real layers or deeper meaning.

It wasn’t until I discovered the homeless in the drains below Vegas that Into the Dark’s characters became something more than one-dimensional creations. Emilie and Nathan only have a few scenes inside the drains, but putting them into the heartbreaking environment enabled me to get to the core of their characters.

Having the bright lights of Las Vegas contrasting against the dark depths below the city, showcasing excess against squalor, is what makes Into the Dark about more than a SWAT officer trying to save the girl.

Many have asked me if I’ve been in the tunnels, and the answer is no. This is where hours of research came in. I interviewed author Matt O’Brien, whose book Beneath The Neon brought the drains into the media spotlight. Matt and I talked at length about what it was really like walking through the dark maze, the smells, the bugs–the fear of what might be around the next corner. No matter how many times he’s explored the drains, that fear has never gone away.

I’m not sure I’d ever have the guts to set foot in the drains, but I know that without the tunnels as a backdrop, Into the Dark wouldn’t be the same story. Because of that, I’m doing what I can to give back to the homeless through a charity raffle.

Until February 28th, 2013, participants will have several options to enter the raffle, including donating to HELP of Southern Nevada. The grand prize will be a $100 donation from me in the winner’s name to the homeless shelter of their choice.

Enter the INTO THE DARK Charity Raffle!

*   *   *
Learn more about Stacy Green at her website and blog.
Purchase Into The Dark on Amazon  Coffeetime Romance  Bookstrand
All other digital formats at MuseItUp Publishing  or Buy the paperback
Posted by Anne E. Johnson at 8:00 AM