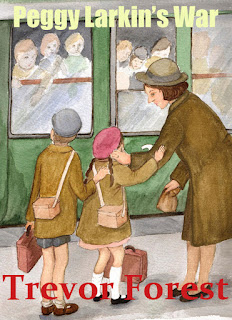 During wartime parents will go to any length to protect their children from harm, even if it means separation from them. Trevor Forest has written a wonderful middle-grade novel about a girl sent away from London by her parents in World War II. Trevor joins us today to discuss his inspiration and research for this book.

Peggy Larkin’s War is the story of a ten year old girl who is evacuated by Government decree, from London to the countryside at the outbreak of war in September 1939.

I first had the idea for the character after watching a program on TV about people who were evacuated from London as children. It must have been a terrible experience to be taken away from everyone and everything you know and sent to live with complete strangers in what was, for the vast majority, a completely alien environment. Some kids had a great time with kind, caring families while others were treated as nothing more than a source of free labour.

I was extremely lucky to find a couple of elderly readers at my local library who had lived in London in 1939 and were evacuated for the whole of the war. They proved to be a wonderful resource and provided much of the background detail, including information about the railways, the wartime posters and the attitude of adults towards children.

A good number of children returned home when the blitz ended but my two new friends didn’t. Elizabeth Scot’s father was sent away to fight and her mother was a skilled worker in a munitions factory. Her house was bombed not long after the evacuation and her mother ended up renting a single room near the factory. The only contact between them was the odd letter or birthday card. Edward Barker, my other contact, lost his mother when their house was bombed in early 1940. The only relatives he had were elderly and had only met him on a couple of occasions so it was decided that he would be better off staying with his new ‘foster’ family.

I began my second line of research by searching for evacuee stories on the internet. The BBC has a fabulous site called The Peoples War, containing interviews and information about the 2nd world war and the evacuation in particular. I logged on to those pages frequently.

I was born just a few years after the war ended so I can remember a lot about the language, fashion and housing standards of the time. Food and petrol rationing didn’t end until 1953. I had my own ration book as a baby.

Illness was another thing I had to research carefully. In the book, Peggy succumbs to Scarlet Fever and I needed to know how prevalent the disease was back then. Scarlet Fever, not a serious disease now, could be a killer back then. Antibiotics were a very recent discovery and any available were used for the troops. I also had to research how diabetes was treated in the pre-war years as Peggy’s host, Mrs Henderson, suffered from the disease.