Novelist Terri Bruce and the Joy of HEREAFTER Research 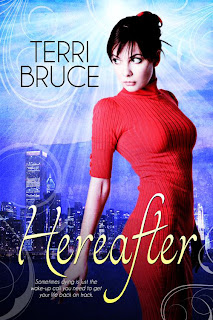 It's my pleasure to welcome Terri Bruce, who's touring her new contemporary fantasy novel, Hereafter. Terri shares her thoughts about how research for fiction can be fun and absorbing, even for the reluctant researcher. As you'll see, Terri set quite a task for herself as she prepared Hereafter!

I never thought I’d like doing research for a book; after all, writing is fun and researching is tedious, right? I mean, who actually liked researching term-papers in school? Yuck! Not me! I love to read well-researched, authentic books—historical fiction and historical romance are two favorite genres—but I always think (accompanied by a sorrowful shake of the head), “Oh man! How tedious must it be to have to research the exact shape of a dress sleeve in sixteenth century France? God bless ‘em, historical fiction writers are either saints or masochists!”

When I set out to write Hereafter I knew I wanted to create a story in which every culture’s and religion’s beliefs were true. Going into this project, I already knew a bit about quite a few cultures—the Greeks, the Norse, the Egyptians. Well…that was three. If I was going to include “every” culture, I was going to have to expand my knowledge. So I did a little research, visited a few websites, boned up on what I already knew and added some more cultures to my repertoire—Romans, Babylonians, Sumerians, Aztecs, Mayans. I even discovered a few cultures I had never heard of, such as the Etruscans.

Well, okay, that was a start, but that was, quite frankly, a whole lot of focus on a few geographic and ethnic clusters—which was reflected in the amount of similarity in the beliefs. I needed more diversity so I started poking into Australian and Africa aborigine, Inuit, and North and South American indigenous Indian beliefs. Now we were getting somewhere! And, wow, this was all really fascinating stuff!

Of course, this was a whole lot of “culture” but I was still missing “religion.” While I absolutely did not want Hereafter to be a religious book and did not want it to appear to subscribe to or advocate for a particular religion or world view, I knew that the story could not be completely divorced from religion and spirituality. I already had a good handle on the modern Christian afterlife and a little knowledge of modern Judaism. I was going to need a lot more than that. Back to the books!

I researched everything that all of the modern religions I could identify had to say on the matter—Buddhism, Hinduism, Islam, Baha’I, Confucianism, Taoism, and more; then I discovered some rich source material on several ancient religions, like Zoroastrianism, ancient Judaism, and such, including quite a few I had never heard of. Around this point, several critique partners reading early drafts of Hereafter asked if I had a degree in comparative religion and after a while, it started to feel that way.

So now I had a ginormous three-ring binder full of source material. And yet, something was still missing—I had a lot of great information on what would happen to Irene after she went through the tunnel, but very little about what she would encounter on earth, as a ghost, which was the main plot of Hereafter. Say it with me—back to the books.

This time, I focused on funeral customs and beliefs related to ghosts and spirits. I already knew about the Egyptian custom of mummification, Irish Banshees, the Jewish tradition of sitting Shiva and burying the dead without embalming, and Chinese Ghost Festival and the idea of Hungry Ghosts. I knew a bit about ghosts in general and a few charms/superstitions meant to either repel or call ghosts. Now I learned about the funeral customs of a hundred different cultures—both ancient and modern—and the names and forms of every type of ghost, evil spirit, and death omen. Oh my! My binder grew fatter and graduated from a 2” shell to a 4”.

I was feeling pretty good about the research I had done at this point; the world-building of Hereafter was rich and intense, full of both subtle and obvious references to a hundred different cultures and religions. And everything fit together much more neatly than I had thought it would. Then…halfway through completing the first draft of Hereafter, I went to two workshops on world-building. One was on “place as character” and the other was about creating realistic cities in fiction. It struck me that I had not been paying enough attention to “place” in my story; or more specifically, to the history of the place where my story was set. Hereafter is set in Boston—a place rich with history, and the ghosts of people from the past were very probably still wandering around the city. If Irene was stuck on earth as a ghost, then it was just as likely that people from other eras were, too. I realized that Hereafter was as much a time travel story as it was a story about the afterlife.

Back to the books!

So now it was once more back to the research, but this time on the history of Boston. I have never been much interested in history and have a terrible time keeping names and dates straight. However, I do love the history of cities—I love learning how they have grown and changed, both physically and culturally. I collect old guide books and love to try and follow their touring instructions, just so I can see what’s changed—new streets that have been added and old streets that have been renamed or disappeared altogether, new buildings that have gone up and old buildings that have been torn down, and the changing borders or even identity of the various districts or neighborhoods. Cities are alive and organic and they constantly grow and change. So for me, researching the history of Boston became just as fascinating and engrossing as researching the afterlife. And what an education! I learned that the South End had once been known for its rooming houses, that the subway line I thought was the newest was actually one of the oldest, and that the clean, business-like “government center” area had once been filled with burlesque halls. In short, I learned that a city I thought I knew intimately, I didn’t actually know all that well, after all.

Finally, I reached a saturation point. I had more than enough information to write Hereafter; there was no point to doing more research, and in fact, time spent doing research was time away from writing. There was no help for it, I had to put down the books and pick up my pen. To be honest, I felt a little bereft. Occasionally I needed to look up a stray fact, verify a spelling, confirm the veracity of a source, but it wasn’t the same. I had become a research junkie and I was cut off, cold turkey. Gradually, the love of writing replaced my newfound love of research and I learned to cope with no longer needing to read obscure texts at odd hours.

It was time to write the sequel.

*   *  *
You can purchase Hereafter from Amazon or directly from the publisher.
You learn more about Terri Bruce by visiting her website.
Follow Terri on Facebook and Twitter.
Posted by Anne E. Johnson at 4:00 AM