A hundred years ago, Corbin Elementary School's building housed Dr. Ebenezer Corbin's School for Psychical Research. It seems that a couple of old spirits are still wandering the halls. It's up to Rhonda Zymler to find out what they want. 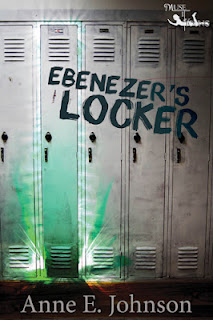 Ebenezer's Locker follows the adventures of Rhonda, a sassy sixth-grader who's having trouble finding her place and identity. Getting to know these spirits becomes Rhonda's quest. The more she digs, the more perilous her task becomes, and to complete it she must take two trips back in time. This story blends the realities of an economically-challenged modern American town with supernatural elements. What Rhonda finds not only gives her life a sense of purpose, but changes the fortunes of her entire town.

Movies, TV dramas, reality shows, novels, non-fiction... Every type of media seems obsessed with the paranormal. But, while this might seem like a new phenomenon, it's only the latest of many times this craze has hit. When I was doing research for Ebenezer's Locker, I learned a lot about a previous period of spectral fascination.

In the late nineteenth and early twentieth centuries, America was loony for specters. The ghost fans, called the Spiritualists, sought connections with the dead in the parlors of mediums. These were men and women (and even children, sometimes) who seemed or claimed to have the ability to talk to the Summerland, the world beyond this life.

In Ebenzer's Locker, Tallulah Radley is an older lady in the neighborhood who happens to be a psychic medium. The kids go to her for help when they realize that they're facing ghosts.

I had a wonderful time doing research about the old days of American Spiritualism. I filled Tallulah's home with the sort of equipment that would have been used at the turn of the century, as if she might have inherited it from a psychic ancestor. Most important for her is a planchette, a wooden device with a pen in it. Through the planchette, a spirit can write a message for the living.

Although American Spiritualism started because people believed in the afterlife and wanted to communicate with it, it blossomed because of its economic potential. People made a ton of money looking into the future or the past for clients. And, not surprisingly, the industry was rife with cheats. My research uncovered many faked, theatrical ways the so-called mediums made their connections with the other world seem more spectacular.

I packed all of these devices into a single, breathless speech by Tallulah, who would never do any of these disreputable things. In this scene, two of the girls are in a seance with Tallulah, trying to communicate with the ghost of Ebenezer:

Mica walked over to one of the two floor lamps in the room. “I should turn these off, right?”
“Whatever for?” said the medium. “We won’t be able to see.” She patted the back of the chair Mica was to sit in.
Mica didn’t budge, though. “Séances are supposed to be in the dark,” she said stubbornly, “or maybe with just one candle.”
I was glad she’d brought that up, since I’d been thinking the same thing. But Tallulah was not pleased. She didn’t sound like a cookie-baking grandma now. “Young lady, sit down this instant.”
Mica, looking as stunned as I was, followed the order.
“Dark-room séances are the last refuge of charlatans,” Tallulah said.
I didn’t get it. “The last what?”
She sighed sharply. “I’ll say it in simple modern words for you young people. Only phonies have to turn out the lights at séances, so they can cheat.”
“What kind of cheating?” asked Mica in a tiny voice.
Tallulah stood, her voice full of emotion. “Some cheaters have an assistant hide in a cabinet and tap on the wood, pretending to be a spirit communicating.” She drew her hands above her head in a circling motion. “Some have wire puppets draped in sheets that float across the ceiling.”
I thought she was done, but no.  She seemed near tears. “I’ve seen phonies keep objects in hidden drawers under the table.” 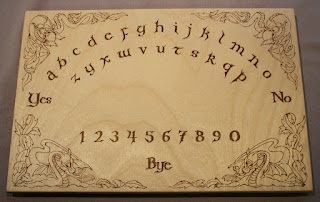 “Why?” whispered Mica.
“So they can sneak them out as if a spirit made them appear. Some will hold a client’s sealed letter to their head and heart and pretend to absorb its meaning.” Tallulah mimed pressing an envelope to her forehead, eyes closed, very dramatic. Then she opened her eyes wide and shouted, “But actually, they drip rubbing alcohol on it so they can read through the envelope. And you know what some fakers do to make it seem like a spirit has appeared in a darkened room?”
We shook our heads, afraid to speak.
“Well, I’ll tell you. They dip gauzy white cloth in glow-in-the-dark paint. And they hide the cloth…” She gasped, as if amazed at her own story. “Well, they hide it in their underwear, children! I will not be compared to these razzle-dazzle snake-oil salesmen.” She plopped down in her chair, limp and exhausted.

*   *   *
You can buy Ebenezer's Locker in any e-book format directly from MuseItUp Publishing
or on Kindle from Amazon.
Posted by Anne E. Johnson at 8:55 AM