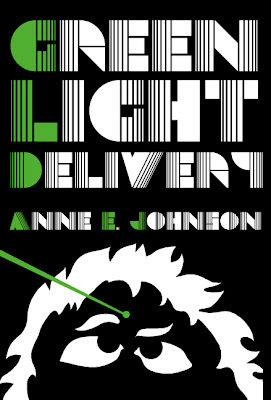 
Webrid is a carter, like his mother and grandfather before him. It's not glamorous work, but it pays the bills, and it gives him time to ogle the sexy women on the streets of Bexilla's capital. Mostly, he buys and sells small goods and does the occasional transport run for a client.

Then he gets mugged by a robot.

Now, with a strange green laser implanted in his skull and a small fortune deposited in his bank account, Webrid has to make the most difficult delivery of his life. He doesn't know who his client is, or what he's carrying, but he knows that a whole lot of very dangerous people are extremely interested in what's in his head. Literally. And they'll do whatever it takes to get it.

With the help of some truly alien friends, a simple carter will journey across worlds to deliver his cargo. And hopefully keep his head in the process.

You can purchase Green Light Delivery directly from the publisher, on Amazon, or Barnes and Noble.
Posted by Anne E. Johnson at 8:11 AM