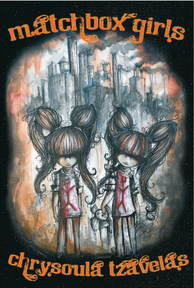 Chrysoula Tzavelas has just released her urban fantasy novel Matchbox Girls. Despite the whirlwind of her book launch, she kindly took time out to discuss her unique perspective on angels.

I've been interested in angels ever since I was young. I think I remember the genesis of my interest: when I was very, very young, I had a dream wherein I went into a man's home, saw a large pair of wicker wings leaning against the wall, asked him about them, and was told, "Those used to be mine."
Later, when I was still quite young, I went to Sunday school, and got very upset when they taught me about Satan, and how, although God would forgive every human being for anything, angels who had made mistakes were cursed forever. That hardly seemed fair. I don't think my Sunday school teachers were very happy with one of their charges crying out of sympathy for the devil.  (Fortunately my mother was more interested in what I had to say than what they did.)
Then there was the early experience of picking up an illustrated Bible in a photographer's waiting room and reading a strange chapter about how some of the angels came down and mated with women and produced giants that dominated the Earth. For a long time I could never track down the text I'd read (and certainly not the vivid illustrations in the book itself), which only made it gain the substance of legend in my mind.
So yeah, I've been thinking about angels for a long time. Celestial messengers of an all-powerful entity who were simultaneously known for their obedience and their disobedience. It was fascinating, especially to a strange little kid struggling to understand both the spoken and unspoken rules of life. As I got older and started to seek out my own entertainment, more and more ideas about angels and their Fallen brothers crept into the mass of knowledge I'd been accreting. Nice angels, devout angels, amnesiac angels, scary angels, irreverent angels, lost angels, misguided angels, and just as many varieties of demons and devils and monsters.
It was clear that the world of celestial beings could be extremely simple: a black and white accent to the questions of human nature, or a whole landscape in which to explore metaphors of choice and destiny and the passions of entities that still seem both alien and so very human.
Guess which approach I decided to take?
*   *   *
You can purchase Matchbox Girls from the publisher, on Amazon, and on B&N.
You can learn more about Chrysoula Tzavelas at her website.
Posted by Anne E. Johnson at 8:13 AM