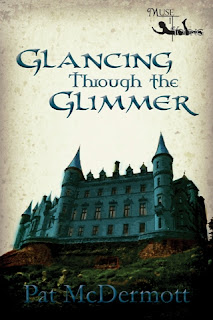 Please join me in welcoming the delightful Pat McDermott, whose new novel Glancing Through the Glimmer is a paranormal young adult fantasy. It's now available from MuseItUp. I asked Pat to discuss what it's like to write on the ancient topic of fairies in Ireland.

Fairies and their cousins appear in the folklore of every culture in the world. They’ve inspired many tales, including Glancing Through the Glimmer, my new young adult adventure. The title is a phrase from The Fairy Thorn, an old Irish poem by Sir Samuel Ferguson. The story, a blend of alternate Irish history, romance, and fairy magic, has been a joy to research. I’ve found countless web sites devoted to fairies, faeries, fae, fay, etc. and have added several volumes on the “Other Crowd” to my personal library.
Most fairies are small, benevolent beings, but in Ireland the “Good Folk” aren’t the cute little Tinker Bell types we know and love. Many are man-sized, and they can be downright mean. Mortals foolish enough to annoy them risk losing their hair, eyes, teeth, even toenails. (As I still have mine, I trust that the fairies in Glancing Through the Glimmer were happy to join the cast.)
I had always thought of Irish fairies as leprechauns. Not so, I learned while exploring the wealth of literature depicting these elusive beings. Leprechauns belong to the class of Solitary Fairies, which includes cluricauns, dullahans, pookas, merrows, silkies, and banshees.

Then we have the Trooping Fairies, bands of rascals who live beneath the hills and lakes of Ireland. One of these troops, the Connaught Fairies, inhabits a crystal palace beneath Knock Ma, a gentle hill in Galway. Their king, a frisky rogue named Finvarra, likes a good dance now and then, though he prefers mortal dancing partners. Over the centuries, he’s stolen quite a few, and he’s still at it, as American teenager Janet Gleason learns to her dismay in Glancing Through the Glimmer.
During a recent trip to the Emerald Isle, I decided to visit Knock Ma. My husband and I drove to Tuam, a small town 20 miles north of Galway City. The town’s name comes from the Latin word tumulus, which means burial mound. Thousands of years ago, the people who lived there used the area as a burial ground, which no doubt gave rise to the local fairy legends. In one of my favorites, an Irish chieftain sets his men to work digging into Knock Ma to rescue his wife, whom Finvarra had kidnapped. The trench they supposedly dug, known as The Fairy’s Glen, is still visible.
We found Knock Ma, and though Finvarra and his troop kept to themselves that day, the postman assured us they were there. “Ah, they’re all over the place,” he said.
Perhaps we’ll meet them another time. It’s their decision, of course.
Many roads twist in Ireland because the builders refused to cut down fairy trees. My grandmother once told me that when she was a child in County Sligo (around 1910), her father would set out a row of stones before erecting any outbuildings on their farm. If in the morning the stones were still where he’d placed them, he knew the fairies had no objections, and he was good to go. If not, then the Good Folk had disapproved of his choice, and he had to try again.
Superstitious nonsense?
I’ve heard too many strange things to be sure. What do you think?

You can purchase Glancing Through the Glimmer here,
and visit Pat McDermott at her website.
Posted by Anne E. Johnson at 8:30 AM